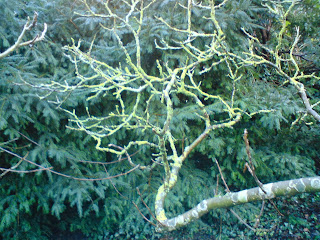 The iPad failed to connect to the Internet this afternoon - which I took to be a sign that I should go and do something else. It's back now but it will soon be time for supper so I'll keep it brief.

Above is a picture of the small crooked branches of the walnut tree. I was taken with the contrast in both the patterns and the shades of green between it and the conifers that form a hedge between this (almost) hidden garden and the cemetery of St Deiniol's church. And here's the bark: 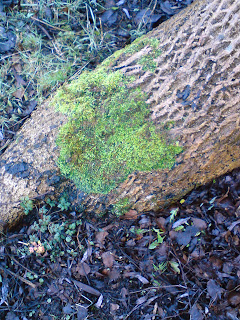 I've had a quiet day today working on a slideshow for my poem Take The Sea Road, going to The Fox and Grapes in the village for lunch - Cajun wedges with salsa and sour cream and half a pint of Doom Bar ale. It's a lovely old-fashioned pub with wooden beams.

I had a rather unexpected conversation at breakfast with the resident chaplain (who is on sabbatical from his parish in Indiana) about Robert Graves and War among other things. He introduced me to a quote from the American writer William Faulkner: "The past is never dead. It's not even past."
Also the concept of 'moral injury' and a First World War poet I hadn't come across before, Geoffrey Studdart Kennedy. He was a chaplain and while his poems don't perhaps have the literary merit of some of the more famous first WW1 poets, they have an interesting perspective.

That's all for now!