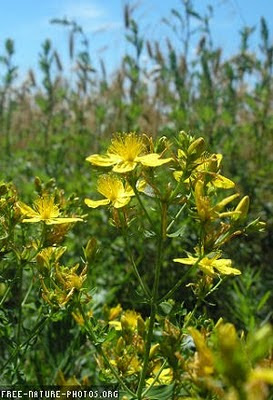 Gŵyl Ifan,
the Festival of St. John the Baptist on June 24th, was the midsummer festival traditionally celebrated in Wales. It was one of the three ysprydnos or spirit nights when the world of the supernatural was closest to ours (the others being Nos Galan Gaeaf on 31st October and Nos Galan Mai, or Nos Galan Haf, on 30th April).
Three key elements of this calendar festival were: y fedwen haf, (the summer birch), the bonfire and the herb St John’s Wort.
Y fedwen haf
Reports of this custom come principally from Glamorgan although there are others from as far apart as Anglesey and Carmarthenshire. The birch was raised on the eve of St John’s Day and, according to one account by the blind poet, William Roberts, from the eighteenth century, the pole was adorned with colourful pictures and the young women decorated it with golden wreaths covered with ribbons. On the top was a weather-cock with gold feathers and ribbons on its tail and underneath that was a floating banner. Much dancing and merriment took place around the birch. 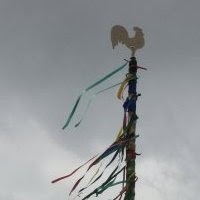 There was a tradition of ‘the theft of the birch’, by which villagers from a neighbouring parish would try to steal the pole, so that the presence of strong youths was required to guard it. The theft of the birch had serious consequences because it was seen as a huge disgrace and no birch could be raised again until another had been stolen to replace it.

A bonfire was as central to the celebrations as it was at the festival of Calan Mai. Marie Trevelyan describes it vividly:
"Three or nine different kinds of wood and the charred faggots carefully preserved from the previous midsummer were necessary to build this fire, which was generally done on rising ground. Into this fire various herbs were thrown, and girls with bunches of three or nine different kinds of flowers would take the offered hands of boys who wore flowers in their buttonholes and hats, and jump together over the midsummer fire. Wild merrymakings these were, and the young people threw the flowers from their posies, hats, hair, and buttonholes into the heart of the flame. Roses and wreaths of various flowers were hung over the doors and windows on St John’s Eve and Day."
If anyone – human or animal – were to jump over the fire on St John’s Day, they were thought to be given immunity against fever and disease for a year.
Trefor M. Owen relates that the origin of these bonfires was in fires of actual bones (hence bone-fire) where the position of the bones after burning was used for divination purposes.
St John’s Wort
The plant known as St John’s Wort was widely revered in Celtic countries. In the Highlands and Islands of Scotland, it was spoken of in terms normally used for noble lords and chieftains as allail, 'of great renown', or loinneil, 'splendid', 'elegant'. The plant was thus honoured and while picking it the person would also recite the purpose it was required for and the intent in taking it, according to the Carmina Gadelica. In Wales it is known as dail y fendigaid or 'the blessed one’s leaf', and llys Ieuan, 'John’s herb'. As you can see from the picture above it is five-petalled, golden yellow with prominent stamens reminiscent of rays of the sun. The stamen, it should be noted, is the flower’s male reproductive organ which produces pollen.
St John’s Wort was put over the doors of houses to keep evil spirits away (mugwort was an alternative if it could not be found) and if gathered at noon on St John’s Day was considered to be effective against many illnesses.
Divination was practised as at the time of the other ysprydnos, since messages and influences could leak through from the Otherworld. Commonly, these divinations concerned the length of life and the likelihood of marriage. One way of divining the length of life using St John’s Wort, even as late as the middle of the nineteenth century, is given again by Marie Trevelyan:
"Take as many St John’s worts as there are people in the house. Clean these free of dust and fly, and hang them on the rafters of the room. Each wort was named after an individual. Those whose plants wither first, die first."
She also tells us that to forecast marriage, spinsters used to make a wreath or garland with nine different kinds of flowers. Then, while walking backwards, they would try to throw the garlands onto a tree. The number of times it fell to the ground represented the number of years they would remain unmarried.
Alexei Kondratiev states that in Brittany the place of the St John’s Wort was taken by the aour-yeotenn or ‘golden herb’ which shines like the sun in the dark on St John’s Eve and at no other time. Mysteriously, it could only be seen by those with the gift of seership. It is possible that this magical herb was actually the St John’s Wort seen in a symbolic or mystical way.

Monoecious silence and other nonsense 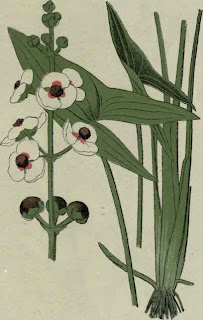 Arrowhead (Sagittaria Sagittifolia): a monoecious plant
from the book "Wayside And Woodland Blossoms", by Edward Step

I recently did an exercise by Karen Swenson from the book The Practice of Poetry. It consisted of choosing unfamiliar words from a dictionary, assigning different parts of speech to them and using them in a poem. The object of the exercise was to concentrate more on sound than on meaning. Here is my attempt:

In dargion safety the sparrow lings softly,
as the orphrey, shallooning his wings,
ginks and clacks to the Trisagion west.
Coffling wanly the niblick sinks
into the monoecious silence.

I found it interesting that ‘orphrey’ (actually an ornamental border on ecclesiastical vestments) must have subconsciously reminded me of osprey and led me to turn it into a bird - showing how we may be influenced by similar sounds to infer meaning, often without realising it.

I liked the phrase 'into the monoecious silence' and wondered if I could recycle it to use in another poem. The dictionary told me it meant, as a biological term, 'with unisex male and female organs' and as a zoological term, 'hermaphrodite'. "Ah", I said to myself, "that won't work then!" But no sooner had I thought that than my mind did a little hop, skip and jump (the way it does) and informed me: "A monoecious silence is one which is sufficient unto itself". And, yes, in a poem you could say that, since poetry isn't wholly subordinate to the structures of meaning that would pin words down… It's one of the reasons I like poetry so much - the alchemy of sound, meaning and association; the mental gymnastics.

Chomsky said “It is fair to assume that neither sentence (1) nor (2) (nor indeed any part of these sentences) has ever occurred in an English discourse. Hence, in any statistical model for grammaticalness, these sentences will be ruled out on identical grounds as equally "remote" from English. Yet (1), though nonsensical, is grammatical, while (2) is not grammatical.”

People have tried, successfully, to incorporate the first sentence into a prose piece, drawing on the several meanings of the words. There is this, for instance, by C.M. Street:

"It can only be the thought of verdure to come, which prompts us in the autumn to buy these dormant white lumps of vegetable matter covered by a brown papery skin, and lovingly to plant them and care for them. It is a marvel to me that under this cover they are labouring unseen at such a rate within to give us the sudden awesome beauty of spring flowering bulbs. While winter reigns the earth reposes but these colourless green ideas sleep furiously."

The second sentence is not so easy to use in prose, being ungrammatical, but it doesn’t present too much difficulty for poetry. For example, off the top of my head:

Poetry does not depend upon grammar to quite the extent that prose does. It incorporates other ways of understanding than by logical processes. The evocation of emotions and intuitions from the varied meanings of words and their sounds, from their echoes and resonances, means that poems may even incorporate contradiction –“green colourless” - and paradox and still convey something meaningful. T. S. Eliot said that “Genuine poetry can communicate before it is understood” and this partly explains how. The right brain is engaged as well as the logical left brain.

Jung has talked about the rush of psychic energy that symbols may give us, caused by the conjunction of different images; their union releases an insight, making us go “Aha!” I think the same psychic charge occurs when the mind does that little hop, skip and jump in order to go outside the usual structures of meaning and expand its understanding when confronted by words used in uncommon and uncharacteristic ways. Which is why I think poetry is often more exciting than prose...
Posted by Hilaire at 18:08 No comments: