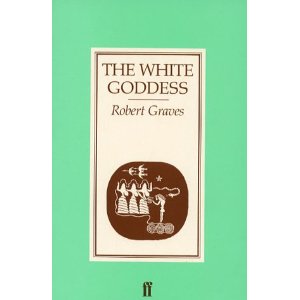 The first time I came across mention of Brigit, goddess of poetry, healing and smithcraft, was in Robert Graves’ book, The White Goddess, which I happened upon in the library of the six-form college I went to. This book was to have a huge influence in shaping my subsequent life and my spine still tingles reading the sentence “My thesis is that the language of poetic myth anciently current in the Mediterranean and Northern Europe was a magical language bound up with popular religious ceremonies in honour of the Moon-goddess, or Muse, some of them dating from the Old Stone Age, and that this remains the language of true poetry – ‘true’ in the nostalgic modern sense of ‘the uninprovable original, not a synthetic substitute’.”
Graves’ thesis was that ‘true poetry’ is that which is loyal to the Theme, namely the story of the birth, life, death and resurrection of the God of the Waxing Year. This God fights with his rival, his twin or other self, for the love of the Three-fold Goddess, “their mother, bride and layer-out”. The God of the Waxing Year becomes the God of the Waning Year, is beaten by his rival/twin and dies but is reborn as his other self. This theme was borrowed from The Golden Bough by the Scottish anthropologist, James Frazer, and adapted by Graves to express his own personal mythology in which the Goddess is the Muse and the poet is the God of the Waxing Year. All true poetry expresses some part of this story (which Graves believed was a fundamental part of our psychic inheritance) or evokes the presence of the Goddess when “owls hoot, the moon rides like a ship through scudding cloud, trees sway slowly together above a rushing waterfall, and a distant barking of dogs is heard; or when a peal of bells in frosty weather suddenly announces the birth of the New Year”.
In the Golden Bough this cycle represented the religious beliefs of fertility cults, in which the god mated with the earth goddess, died at the harvest and was reincarnated in the spring. Graves lived on the north-west coast of the island of Mallorca where life was still ruled by the old agricultural cycle and he commented that what he wrote would read “very perversely and irrelevantly” to people who were attuned to a more industrial way of life. He had an instinctive mistrust for the growth of industry in the West and its associated values:
“…we have come to be governed, in practice, by the unholy triumdivate of Pluto, god of wealth, Apollo, god of science, and Mercury, god of thieves. To make matters worse, dissension and jealousy rage openly between these three, with Mercury and Pluto black-guarding each other, while Apollo wields the atomic bomb as if it were a thunderbolt…”
According to Graves, the function of true poetry is the religious invocation of the Muse; its use is “the experience of mixed exaltation and horror that her presence excites”. He saw this as having been once a warning to man that he must “keep in harmony with the living creatures among which he was born, by obedience to the wishes of the lady of the house” but in his day (he was writing in 1960), the warning had been ignored so that the “prime emblems” of poetry were being dishonoured. Nowadays, he said, “serpent, lion and eagle belong to the circus-tent; ox, salmon and boar to the cannery; racehorse and greyhound to the betting ring; and the sacred grove to the saw-mill… the Moon is despised as a burned-out satellite of the Earth and woman is reckoned as ‘auxiliary state personnel’. Money “will buy almost anything but truth, and almost anyone but the truth-obsessed poet.”
In the last chapter of the book he talks about the suppressed desire of Western people for the return of the goddess and foretells ecological disaster if it is postponed, for the longer it is:
"… and therefore the more exhausted by man’s irreligious improvidence the natural resources of the soil and sea become, the less merciful will her five-fold mask be, and the narrower the scope of action that she grants to whichever demi-god she chooses to take as her temporary consort in godhead."
True poet that he is, he placates her with a poem, the last stanza of which warns:

At dawn you shall appear,
A gaunt, red-wattled crane,
She whom they know too well for fear,
Lunging your beak down like a spear
To fetch them home again.


***
To me the White Goddess is an extraordinary book, filled with power and inspiration. A lot of the scholarship has been shown to be flawed and Robert Graves’ intuitions and theories have given rise to some popular misconceptions which have become part of neo-pagan lore – such as the ogham tree calendar and the image of a triple moon-goddess, maiden, mother and crone, as a basic goddess underlying all European – and therefore Celtic - goddesses. It is not taken seriously by scholars and has become discredited now among many Celtic pagans, particularly Reconstructionists. To be fair to Graves, he himself said that he didn’t trust his historical intuitions any further than they could be accurately checked. (He appealed for feedback from Celtic scholars but was disappointed not to receive any.) 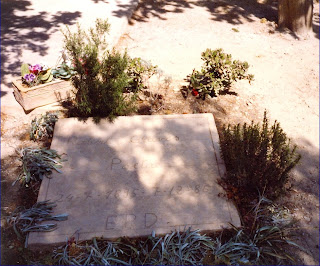 Robert Graves burial place in the churchyard in Deià﻿ (Click to see detail)
However it has been a hugely influential book, perhaps, as a single source, the most important for encouraging the return of the goddess and bringing the treasures of Welsh and Irish mythological and poetic sources to a generation hungry for their sacred insights and practices. The book was double-edged in propagating misconceptions about Celtic texts but at the same time encouraging many to learn more, promoting Celtic studies, and I would argue that its legacy is positive rather than negative in this respect. Alexei Kondratiev, rather to my surprise, agreed with me and I notice that in his book The Apple Branch, he concurs with Graves’ intuition that the thirteen lines of Irish Song of Amergin relates to the thirteen moons of the lunar year and the imagery of each line describes some attribute of the different moons.
So as well as giving credence and form to my perception of nature and the land as sacred, The White Goddess was the first book to introduce me to an ecological awareness as well as to Irish and Welsh mythology in general and Brigit in particular. The book also enhanced my perception of poetry as a magical language.
After six-form college I went on to university to read English and, having taken the poetry module, wrote a dissertation on ‘The White Goddess in the Poetry of Robert Graves'. I decided to hitch-hike to the island of Mallorca where he lived to visit him in the summer break before my final year and talk to him about it. He was away in London when I arrived but I eventually came across him at the post office and we went back to his study, talked about the dissertation and he showed me his latest poems – a wonderful encounter. I visited many times subsequently but that first meeting as the proverbial snotty-nosed undergraduate was, of course, the most precious.
I fell in love with the village of Deià where he lived: its turquoise-blue sea, mountains rosy in the evening light, the tinkling of bells as the sheep wandered among the olive groves on the hillside going down to the cove, the church perched on the hill at the top of the village which Robert believed was originally the site of a temple to Diana… it seemed like paradise to a girl raised on the flat lands of East Yorkshire, knowing only the great North Sea which was completely different in character to the Mediterranean, being cold and grey and inhospitable. 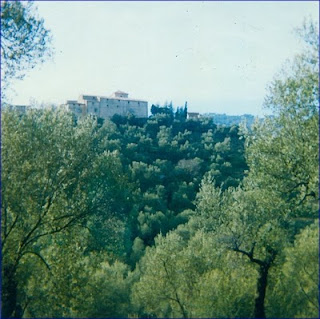 The hilltop church at Deià﻿
﻿
I wasn’t the only person to be attracted to the village by Robert and The White Goddess – I remember in particular an American girl arriving on the rickety bus from Palma one afternoon. As she came down the steps of the rickety old bus, her small brown suitcase fell open and the contents spilled out onto the road – there among her jumbled clothes was the small Everyman copy of the Mabinogion, identical to the one I had at home. I returned to the village after finishing at university and lived there for a few years before going back to England to join my partner in London and have a child. I visited rarely and haven’t been back for over 20 years although I still sometimes dream about it. After a few years in London - not being a city girl - I moved to Wales, inspired again by The White Goddess, and have been here ever since.
Women and poetry


Graves’ Theme is, as I have said, a personal theme which is suited to a hetero-sexual male and leaves rather open to question the role of the woman poet. Woman is not a poet, he declared at one point, “she is either a Muse or she is nothing”! But then he seemed to relent and said that this didn’t mean a woman shouldn’t write poems but that she should write as a woman, “not as if she were an honorary man”. Although good advice this still meant, for him, writing as he thought a woman should be: “A woman who concerns herself with poetry should…either be a silent Muse… or she should be the Muse in a complete sense: she should be in turn Arianrhod, Blodeuedd and the Old Sow of Maenawr Penardd who eats her farrow…She should be the visible moon: impartial, loving, severe, wise”. He thought that domesticity was anathema to the poet and the Muse and that the White Goddess was always ‘the other woman’. As for motherhood: "...if a woman-poet can get a healthy child in exchange for the gift of poetry, why not?" So his view of the Goddess and the woman poet might be said to be rather prescriptive!
Naturally, for all his vision and insight, he couldn’t totally escape being a product of his time, his upbringing and his experiences. He was gracious enough to recognise that one’s relationship with the Goddess was none of his business and for me, what is important is his recognition that the marginalisation and exclusion of the feminine was a cause of great harm and danger to us and the ecosystem of which we are a part, his weaving together of mythology and poetry and his understanding of the magical nature of poetry:

“True poetic practice implies a mind so miraculously attuned and illuminated that it can form words, by a chain of more-than-coincidences, into a living entity – a poem that goes about on its own (for centuries after the author’s death, perhaps) affecting readers with its stored magic…the source of poetry’s creative power is not scientific intelligence, but inspiration…”


So I celebrate The White Goddess and think it deserves more credit than it gets these days. It is perhaps not the best book to read if you want an introduction to Celtic Studies or Celtic Reconstructionism but if you want to explore mythology, poetry and many ancient Irish and Welsh texts in the company of someone with an extensive knowledge of them, a formidable intelligence, poetic vision and iconoclastic ideas, then I recommend it thoroughly.
Posted by Hilaire at 20:12