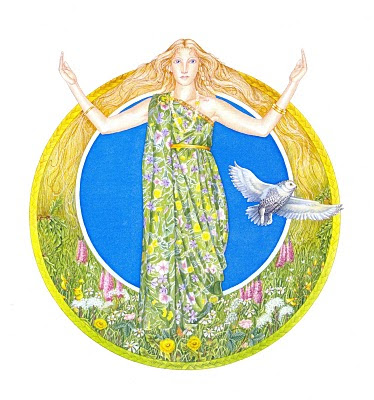 ‘…and Gwydion and Math made for Lleu Llaw Gyffes a wife out of the flowers of the oak, the broom and the meadowsweet and her name was Blodeuedd. And when she betrayed her husband with Gronw Bebyr, Lord of Penllyn, for punishment she was turned into an owl…’
from THE MABINOGION

but she lay in her lord's bed and was loved
she bore him his cup and his meat
gold was given her, white linen
and many songs by the firelight
of longing and pride

and certain at nightfall
when the owls cry out
I think I see her clear
a white shape on the hill
-but this is an old man's longing
a shadow, a dream
a memory of harp-song and flowers
and a fair woman walking in the spring

This rather haunting poem brings us to a new relationship with the Blodeuedd story, giving an eye-witness account which brings the events a little closer while looking at them from a new perspective.

The poems in the collection could be said in general to show us a connected world whether they portray human relationships – a lover, a husband, a son; the natural world of leaf and bird, of bone and stream; the dead; the ancient sacred places such as West Kennet Long Barrow and the Uffington White Horse or the myths that are part of human culture. All are evoked with an imaginative intensity which dissolves time and distance and is never sentimental or trite.

I first came across Frances Horovitz in an anthology of love poems from the sixties. Her poems stood out as being more subtle and sometimes thought-provoking than many of the others which often had a certain exuberance and crudity perhaps typical of the subject at that time. In Loving You, reprinted in this collection, the poet moves “as soft as old silk” in the room where her lover is, but an elongated line almost mid-way through the poem, standing out starkly in contrast to the rest, startles us when the poet declares: ‘I could mark you through to the bone’ before retreating and deciding to walk gently “soft as silk/loving you”.

I like the edginess, the feeling of danger that pervades many of the poems. Humans have the power to hurt each other, even if they will do none. Nature too is as cruel and as kind as humans are. There is an honesty here which doesn’t avoid these realities but offers us a richness of experience and an elemental beauty as compensation.

More often than not the landscape holds some kind of threat; in Crow the bird is ‘a dark spy in the land’, in Journey ‘the leaves are black/ and grab at my face’ while in Winter Woods “our warm blood stills/ the sun is livid in exile/ we have encroached -/ this is not yet our land”. But sometimes too the natural world offers solace as when soapwort and figwort act ‘as torch and talisman against the coming dark’ in Flowers or when ‘Bird-song and water bear away grief’ in Old Song. And among the last poems Frances wrote before her early death at 45, is the beautiful Evening where, as she waits for the ‘lessons of grief and light’ she sees the luminous hills and knows there will be the holly tree, the hawthorn, mistletoe and the thronging foxgloves, sees also the bluebells ‘heaped in a pot/ still hold their blue against the dark’.

One of my favourites in the Collection is the Poem Found at Chesters Museum, Hadrian’s Wall. I have visited this museum with my son and particularly noted the inscriptions which the poet has so skilfully heard and made into a poem here: the invocation of the gods and goddesses, the catalogues of tools, like incantations, identifying the roles of men and women and finally the faltering of the inscriptions as the past fades and moves beyond our reach. You can hear Frances Horovitz read it herself here on the Bloodaxe web site, along with four other of her poems, including Flowers, mentioned above. She was renowned for her reading of poetry, possessing, as her publisher Bloodaxe says, “a rare ability to hear a poem and become its voice”. In her reading of this poem, its true power is beautifully revealed. [The new edition of her Collected Poems, 2011, comes with a CD.]

The other thing I think special about this collection is the voice of the mother and her young son glimpsed through several of the poems – a relationship not often sustained in poetry collections. The Letter to My Son written not long before her death, is heart-breakingly poignant and the final resolve is wise advice to any parent on letting go of their child:

“- and this, your early body, soul and mind,
hold me to myself
when all else falls apart.
These memories are mine:
The rest of you I let go free,
my child who will be a man.

So many of the things I find most important in life are here, the intricacies of our relationship with landscape and the natural world, other human beings, the past and present, our own myths. And more than that – it is a rare collection because it lets us follow the poet to a place where few poetry collections go – almost to the last moments of life. Her husband, the poet Roger Garfitt, has bravely and judiciously included her last poems in a section entitled Unfinished Poems and Fragments. Wilson Ward sparsely describes a fellow inmate of the hospital, the aptly named Mrs Rivers, who floats out of the world, leaving everything behind as we all must do; the final poem, Orcop Haiku, leaves us with a brief glimpse of the view from her September window as she lay, confined to bed, but still engaging with the landscape beyond.

The images are spare but rich, sometimes haiku-like, evoking the beauty and precariousness of life, and there is wisdom here too. As James Wood commented in The Times, “One is reminded, gratefully, of John Updike’s appreciation of Wallace Stevens: “What a good use of life, to leave behind one beautiful book."
Posted by Hilaire at 16:24 2 comments: 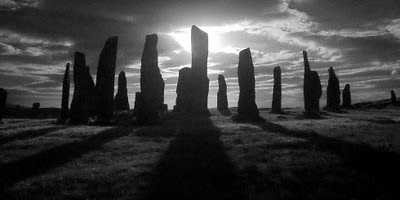 The Callanish Stones: a haibun by Noragh Jones

On the Isle of Lewis in the Outer Hebrides an old woman tells me tales of the Callanish Stones dancing on Midsummer Eve. In the white nights of the far north the great circle of stone beings awakes and honours the ancestors entombed in these red moss bogs. As midnight nears, the giant stones shift and stir for one short night of celebration. Before dawn they are back in their ancient places, for on Midsummer Day they guide the rising sun down their stone road to light up the innermost heart of the stone circle.


* * *
A fine drizzle is falling. In the midsummer glow that is neither sunlight nor moonlight I enter the stone circle and walk around aimlessly, wondering where to take my place and wait for the witching hour. I watch myself keeping to the edge and avoiding the tall centre stone. Tribal memories of human sacrifice? In the end I prop myself against what I hope is an unassuming stone outside the main circle. I drink coffee from my Thermos flask. I take deep breaths and try to meditate, but the pull of the awakening stones is too strong. I look skywards. A lively south westerly has risen and is chasing the clouds across the darkened moon.

Five minutes to midnight. I feel the hairs on the back of my neck prickling. Soon I’m shivering all over. The stone ones don’t want me here on this night of all nights. And I don’t want to be here either. If I will myself to stay I’ll be a madwoman by dawn? Well, maybe only the hair turning white overnight? Who knows?

Fingers numb, I pack my rucksack and make for the road. My feet sink in the gripping bog. The wind tears at me, forcing me back with every step forward. The light that is neither day nor night deceives me. Are the stones really dancing there across the red moss? And what if I joined them? Teeth chattering, I drag my puny self away from the power of the circle, till I am more or less an ordinary human being again.

Such loss, such gain…

When I look back from the safety of the tarmac the familiar moor has already gone. And in its place?

reeling planets
the dancing stones
are juggling sun and moon

From Stone Circles: Haiku and Haiku Prose by Noragh Jones
Posted by Hilaire at 14:46 No comments: