The Polio Pond by Ann Alexander

Couldn't get there quick enough,
legs pumping bikes
down nettled alleys,
over bomb sites and the dangerous road,
out of the light

and into this cool spinney, where
a pond of standing water waited,
still as a crouched cat.

We'd heard the polio lived here,
biding its time in mottled dark,
belonging to neither day nor night,
nor any certain thing.

We threw sticks, threw stones.
Well back, on guard, then inching close,
we stared into its clouded heart,
swore we saw the bloody eye,
the tentacles,
the curled chameleon's tongue.

© Ann Alexander (from the collection Too Close) 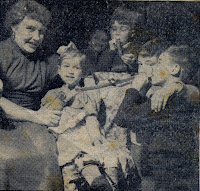 A picture of me from the local paper at the Infantile Paralysis Fellowship party in
Wakefield Town Hall 1956, on a rare outing from Pinderfields Hospital.

In 1952 I contracted polio which left me with a paralysed leg. In the 1940s and early 1950s there were major polio epidemics in Britain and naturally there was huge fear around them. The virus was thought to lurk in water and warnings were given out in schools and signs hung in public swimming-pools. As well as The Polio Pond being an excellent poem, a piece of social history and a depiction of the way children are attracted to danger, there was something about the way Ann Alexander portrayed polio as a dangerous beast rather than an invisible virus that I found very empowering.

I used to go to a pond in the overgrown garden of a deserted house, with some children from the village, when I was a child and it reminded me of Ann's pond. At a mythic level, a tale began to unfold in which I had been one of the children who didn't get away in time when the beast emerged. So I was wounded by it and also in a strange way tainted by it - which explained the fear I engendered in other children sometimes, their own fear of disability or fear about how to relate to someone who is not like them perhaps. There is a kind of power in being able to make people afraid, but also I felt curiously strengthened by the feeling that I had encountered the dangerous beast and survived - had more than survived.

The poem worked on me on various levels, showing how magical poetry and stories can be. Disability is so often about disempowerment that it's good to have a sense of the opposite in a new way. Here's a draft of my own poem written in response to Ann's (which I have copied here with her kind permission) in which I've taken the story further. I've also suggested that hate and cruelty are monstrous too.


Biding its time, the pond lay watching,
a bright eye in the tangled waste;
the bars of a gate floated
dismembered and useless,
dotted with pondweed like green confetti.

The children threw stones and gobbets of mud,
their eyes gleamed, reverting to feral
and catching their offerings
the pool gobbled them down,
sent up bubbles signalling relish.

Strengthened, the monster emerged,
black slime ribboned his scales.
A dark bridegroom, he leered towards them
and all valour lost, they turned and fled,
except for the one who was left behind.

In the claws' grasp there's no time for fear,
there's only surrender, the rushing descent
into the tunnel, the muscular throat.
Claimed by the monster the girl becomes It,
scales now exchanged for an iron splint,
talons curved to the arch of a wheelchair.

Disallowed sticks, the children throw insults;
sticks and stones would break her bones
but words as well could harm her.
Yet where there’s fear there’s always power:
To become what is feared is to move beyond fear.

In the alien form she discovers her might,
feels the rush of sinewy wings
and knows her new world is still the whole world,
the monster now fled to the pools of their eyes.


If you have enjoyed these poems and would like to know more about the British Polio Fellowship, you can find out HERE and make a donation HERE. If you can, please spread awareness of Polio, a largely forgotten disease which still affects 120,000 people in the UK, and of the work of the Fellowship. Or if you are outside the UK, please find out about how polio affects people in your own country. Thank you!

The Three-Fold Fire of Brigit 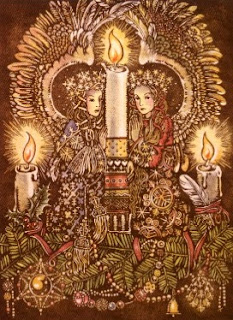 Towards the end of my last flame-tending shift for Ord Brighideach I settled down on the sofa beside the candle and contemplated the flame. I've found this is a good way to calm my mind and chase away the racing thoughts I've been plagued with recently. I was feeling that I had been stretching myself too thin for the last ten months and was wondering what I should be doing with my time, whether I should take a step back, what part of what I do I should concentrate on. The three fires of the Ord Brighideach charm came into my mind and rearranged themselves, providing a sort of answer:

Fire in the Head which incites and inspires
This fire is often with me and is what inspires and animates me. I am so grateful for its presence. But perhaps sometimes it burns too uncontrollably and I need to think of it in balance with the other Fires. I meditated on the importance and teachings of these.

Fire in the Forge which shapes and tempers
This fire is the fire that brings the inspiration and creativity into existence. Like hammering out iron, it is often hard work. But we must remember the process of tempering. To increase the iron's toughness by making it less hard, it is sometimes heated to lower temperatures which give more flexibility so that it becomes less brittle and less likely to break under pressure. The forge therefore requires that we know when to stop putting ourselves and our work into the hottest fire, how much heat it is necessary to apply in order to sustain ourselves and give our creativity endurance and flexibility. Quenching the hot metal in water, also associated with Brigit, may be necessary sometimes in order to fix the hardness so that our work cannot be driven out of shape by outside forces. A time to rest and leave the process of forging for a while, to let the work simply be itself in the world.

Fire of the Hearth which nourishes and heals
This fire is the one that we go out from and come back to. At the heart of life, it's about being not doing. It sustains us and enables us to be open to the Fire in the Head and to bring our work into fruition with the Fire of the Forge. Sometimes we need simply to rest by the Fire of the Hearth.

Meditating on these feels to me like a good practice for flame-tending vigils. It's a good way to check that I am using Brigit's fire wisely and well to enhance my life, work and relationships.