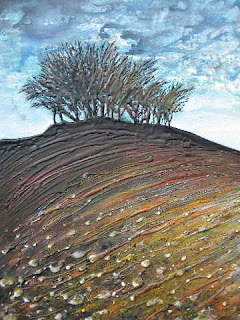 Ploughed Field by Mark Fisher
from The Verses of the Months
The month of March, great is the pride of birds,
bitter is the cold wind over the end of the ploughed field;
Mis Mawrth, mawr rhyfic adar,
chwerw oerwynt ar ben talar;
Welsh, c 15th century
Dewi Sant 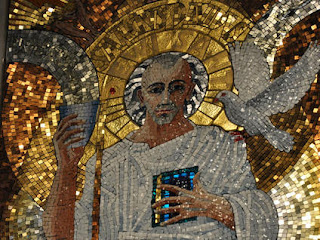 Mosaic in Westminster Abbey
March 1st, the day of his death, is the feast day of St David or Dewi Sant - the patron saint of Wales. Tradition states that his birth was foretold to his father, Sant, by an angel while he was out hunting one day. The angel prophesied that he would find a stag, a salmon and a hive of bees by the river Teifi. He was told to take these to Maucannus’ monastery where they would be kept for David. In the Latin lives, the interpretation of this is that they signify David’s power over ancient serpents, his wisdom and his abstinence. Linked with this is the story that Patrick wanted to settle in Glyn Rhosyn but was told by an angel that he must, in the words of a cywydd by Ieuan ap Rhydderch, “leave the land which was kept by holy God for blessed Dewi” (gadu’r tir a gadwyd/ O Dduw lân I Ddewi lwyd). Patrick departed in tears but was given the care of Ireland instead.
No-one is sure how David came to be patron saint of Wales but it is recorded in his Lives that he was chosen as the chief saint at the Synod of Brefi. This Synod was attended by the great and good, religious and secular, and it was decided that each of the clergy would preach in turn and the one who could be heard by everybody would become the chief and would be made archbishop. David didn’t attend at first, but after repeated messages and the threat of fasting, he went. None of the others had been able to be heard by the crowd, in spite of standing on a pile of garments. David merely stood upon a handkerchief (or perhaps a shroud) belonging to a young boy he had raised from the dead and the land rose under him, forming the hill in Llanddewi Brefi where the church now stands. He was renowned as a preacher and being raised up, everyone could hear him. A dove sat on his shoulder while he preached at the Synod and doves had taught him his books. Not surprisingly, the Dove is one of his symbols. 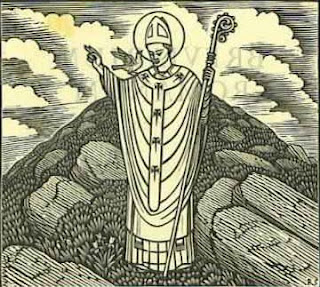 In the Armes Prydein or the Prophecy of Britain, an early 10th century Welsh poem from the Book of Taliesin, David is the only saint to be named. The poem relates how the Brythonic people allied themselves with the Scots, Irish and Dublin Vikings and, under the Welsh leaders Cadwallon and Cadwaladr, vanquished the Anglo-Saxons from Britain. The author is thought to have been a member of one of St David’s monasteries so this may be why David is given such prominence. Possibly this poem helped to place him in a leading position in Wales.
Leeks are another symbol of St David and have been associated with Wales since at least the time of Henry VIII. There is a tradition that David told the Welsh soldiers to wear a leek in their hats when they fought a battle against the Saxons and were victorious. Another tradition says that the Black Prince gave them to the Welsh soldiers to wear at the battle of Crécy. (I am sure that I have read an account, possibly in a herbal or medical text, that leeks worn in battle would make the warrior invisible or impervious to injury. As yet I’ve been unable to locate it but if I have remembered correctly, it might explain this use of them. I’ll keep searching.)
When he decides where to settle in Wales, David has an encounter with a prince called Boya which is somewhat reminiscent of Patrick’s confrontation with the druids at Tara in Ireland. It is said that David lit a fire and the smoke encircled the whole of the island, extending even to Ireland. Lighting a fire in this way was a recognised way of staking a claim to land. The Welsh laws call the right to dwell on inherited land dadannudd, the uncovering of the fire, and into comparatively recent times, someone who could build a house overnight, a tŷ unos, and light a fire in it making smoke rise out of the chimney by dawn, would have the right to the land. In Ireland too, the lighting of a fire on the land was a prerequisite to claiming ownership of it.
A new mosaic of St David, by Welsh artist Ifor Davies, at Westminster Cathedral was blessed by Pope Benedict XVI when he visited the UK in September. The stone at the bottom of the mosaic is from Llanddewi Brefi, the spot where the miracle of the rising of the land is supposed to have happened. 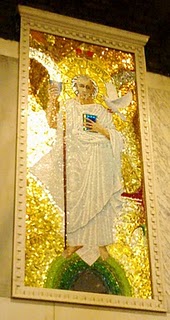 The Pope, who had been unable to visit Wales, blessed the mosaic with water from the holy well of St Non, David’s mother, and had this to say about St David:
Saint David was one of the greatest saints of the 6th century, that golden age of saints and missionaries in these isles, and he was thus a founder of the Christian culture which lies at the root of modern Europe. David's preaching was simple yet profound: his dying words to his monks were, 'Be joyful, keep the faith and do the little things'. It is the little things that reveal our love for the one who loved us first and that bind people into a community of faith, love and service. May Saint David's message, in all its simplicity and richness, continue to resound in Wales today, drawing the hearts of its people to renewed love for Christ and his Church.
He ended with a few words of Welsh: Bendith Duw ar bobol Cymru! God bless the people of Wales!
Germaine Greer, writing about the mosaic in the Guardian, was not happy. She lamented that church art is now “feeble, derivative and kitsch” and thought that people “who are capable of the heroic acts of faith required of today's Catholics should not be mocked by being fed such meretricious pap.” I won’t comment on the art (except to say that I’m a sucker for things that sparkle!) but it’s nice to see a young St David with a contemporary face.
There’s a rather lovely Green Man carving in St David’s Cathedral in Pembrokeshire, under one of the choir seats. 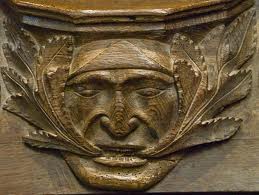 And to end, as I've mentioned before, there's a picture of Dewi as a boy with St Non, his mother, in the double window in the church of Llansantffraed in Llanon, alongside Ffraed. (Click on any of these pictures to enlarge them.) 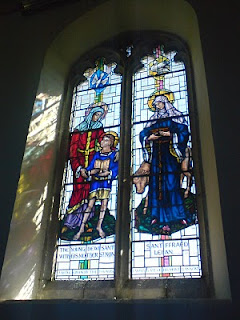