Celebrating May - with Dafydd ap Gwilym 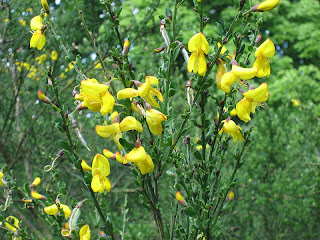 But it's cold and gloomy here in West Wales and the may blossom is not yet out. I think it might be some time… Here are some lines of an Ode, by the 14th  century Welsh poet Dafydd ap Gwilym  (although I believe it has also been attributed to the 15th century poet Robin Ddu in some of the manuscripts). It contrasts January and May, winter and summer, but could be mistaken for a description of our current weather.

Urging on tides and colds
and in the brooks a brown flood;
a turmoil fills the rivers,
day is angered and offended,
and the heavy, chilly sky
with its hue obscures the moon…

When May comes in its green livery
with ordination for the fresh leaves
then green grows along the threads
of the bush for him who owns it.
Fair is the tree and lively,
from whose branches grow thick gold;
God gave, o faultless structure,
a shower of gold to its stalks.
Let my girl rejoice that a green grove
makes a paradise for a poet.
We love the loveliest flowers,
but these boughs are summer’s frost.

The bush which is celebrated here is of course the broom (Cytisus scoparius) and I’m happy to say that in my garden there is a shower of gold on its stalks and the air is rich with its honey scent. A paradise for a poet indeed.
Posted by Hilaire at 12:46