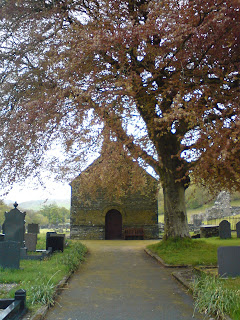 The church next to Strata Florida Abbey.
Dafydd ap Gwilym's yew tree is to the left of the picture.

Recently I went to the Open Day of the Centre for Advanced Celtic Studies at Strata Florida, or Ystrad Fflur,  the site of a Cistercian abbey. Although the weather was cold and grey, it was a truly lovely and inspiring day. Just what I needed as I had been decidedly lacking in hwyl (enthusiasm, humour) lately.
The abbey is about a mile from the village of Pontrhydfendigaid, Ceredigion, some 15 miles from where I live. Originally founded in 1164, many important manuscripts are thought to have been written there, namely Brut y Tywysogion, The Chronicle of the Princes, a major source for early Welsh history;  Llyfr Gwyn Rhydderch, The White Book of Rhydderch, which contains the stories of the Mabinogi, and the Hendregadredd Manuscript which contains an anthology of poems of the 12th and 13th century Beirdd y Tywysogion (the Poets of the Princes) or Y Gogynfeirdd (the Not So Early Poets). Around 1330 a number of poems by contemporary poets were added and there is one poem of Dafydd ap Gwilym’s which is probably written in his own hand.
Dafydd ap Gwilym was born not far away in the village of Penrhyncoch and it is likely that he was educated at Strata Florida by the monks and was buried in the churchyard there when he died. A fellow-poet, Gruffydd Gryg, wrote an elegy to him, addressing the yew tree which grew over his grave. It was the custom then, however, for poets to write elegies to each other when they were still alive so it isn’t certain that he is buried there. However it is thought that the yew is old enough to have existed in his time and there is a memorial to him placed there. 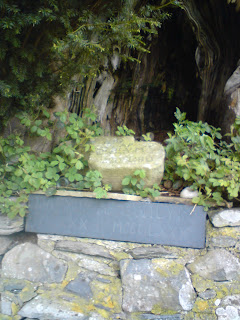 This yew-tree for the best of men,
Near the walls of Strata Florida and its hall;
God’s blessing on you, happy tree,
For growing as a house for Dafydd.

In an earlier exchange of funeral odes with Dafydd, Gruffydd had written:

Sadder now is every area of land,
but heaven is nine times more joyful.

Dafydd Johnston gave a talk among the ruins about the poets of the abbey, quoting from the medieval poet Dafydd Nanmor’s poem about Strata Florida. He tells how the Abbot  Rhys ‘cut ten complete windows, half the cost of this went in glass’; the abbey had roofs of 'heavy lead', 'so woven as to leave no holes for ice, water, snow or rain'. Between her walls were 'acres for burying lords' and there was music too – he heard the fair sounds of treble, mean (the refrain or chorus of a song) and burden there.  He related how there was a great belfry, lime dressed, huge and white, with a cock on top of it. It was so large that if Noah’s flood were to come again, all the saints inside would be protected. 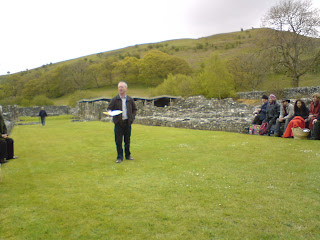 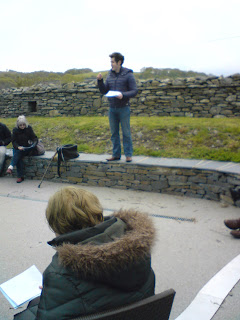 After this it was time to go and learn about cynghanedd from Eurig Salisbury who perched on top of the wall by the garden. It had a rather medieval feel to it – being taught something in the open air, the words blown on the cold wind. Not so much a hedge school as a wall school perhaps… It was a very clear and concise introduction to complicated Welsh metres with an excellent handout. I was motivated the next day to try a few lines of (rather clumsy) cynhanedd sain to give an image of the day:

Sitting in the cold in the fold of Strata Florida
hearing the tale of the travail of the venerable
I catch sight of the flight of the falcon
which soars in the sky like the sigh of a soul
Ideally the lines should have 7 syllables (such as in 'Make fish the dish of the day' - remember that ad?) although I think more are permitted.
And then back to the impressive West Gate to hear poems about Strata Florida by the Welsh poet, Gwyneth Lewis. CADW commissioned her to write them in recognition of its literary and cultural associations and to celebrate the re-opening of the abbey. The poet said that this was for her the high point of her career and she planned later to light a candle at Dafydd ap Gwilym’s memorial ‘in gratitude and humility’. 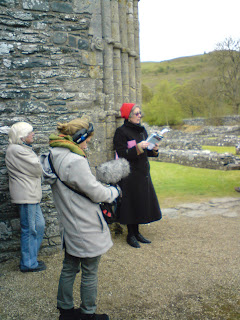 The English poem had, at times, a bare, somewhat staccato feel to it, and it wasn’t until I saw it written down that I felt I understood the concept underlying it (although who knows whether it is what the poet intended). To me it seemed to contain, in almost concrete fashion, some of the feel of the abbey. Its incomplete sentences were fragments, like the surviving stone fragments of the abbey... only the great West door remaining intact, offering us through through absence rather than presence an opening into something greater, an expanding universe. But the poem ends by reminding us that we have to find our own door; a gateway to all ages, to the timeless in the temporal. Perhaps the picture below will give you some idea of what I mean.
…Pass
Through this door
Into Christ, the expanding
Universe. Dimension:
Wonder. Uplands bare,
Riches below…
… This
Door. Find your own elsewhere.
Now. The future. Then. Then now. 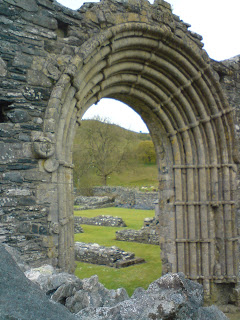 I remembered that the medieval Welsh poets were sometimes referred to as builders and their poems were not composed but built...
The Welsh poem was quite different, the poet asking for her ashes to be scattered in Ystrad Fflur (which in an article in CADW's magazine Etifeddiaeth Y Cymry she describes as being a cornerstone and frame of her life) and ending:
...Gwisgaf y gwynt, fy nghorff
Ac, mewn munud daw awel lem
O'r mynydd gan iasu'r glaswell yn emau byw.
(I'll wear my body, the wind, and in a moment a cold breeze from the mountain will thrill the grass into living gems.)
***
Lunch was a cream cheese and salad roll I’d prepared earlier, finished off with digestive biscuits and a flask of tea. I ate it sitting in the car which was consolingly warm, looking out over one of the fields. Then it was a spell of finding out how to add shapes to a mosaic of an archway with the words STRATA FLORIDA above it. Rob Turner is the artist commissioned to display the poems in a permanent setting at the abbey. You can read about his design and progress HERE 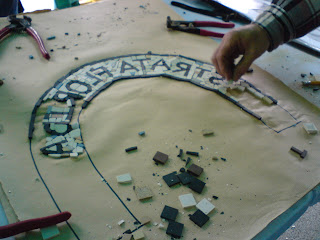 There was a final talk on manuscripts and princes by Ann Parry Owen with a very useful illustrated booklet she had produced (I only managed to get one of the Welsh copies but it is proving very good for me having to translate it). Before going home, I went into the visitors' centre to’ make my own tile’. This consisted of buying the tile which resembles unset plaster of paris (but has dried into something that feels very light, rather like polystyrene) and then choosing one of the designs from the several tiles which have survived at the abbey and impressing it on the tile. I decided on ‘the man with the mirror’ – perhaps a symbol of vanity although other interpretations suggest he is a hunter. I like to think he’s a poet of the green wood holding up a mirror… 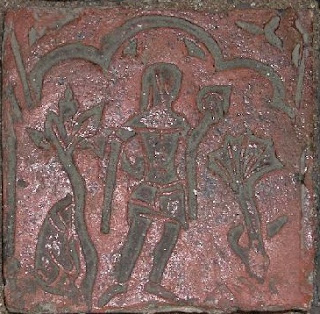 And finally, not to be forgotten, the Flowers - bluebells and the promise of foxgloves . 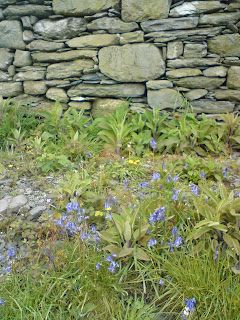