The Olympic Flame and Semiotics 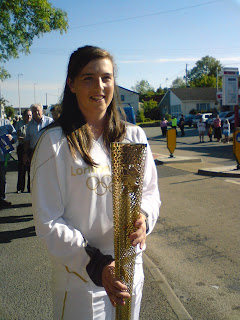 I hadn’t been overly fussed about it – not being a sporty person, even from an armchair – but when the route of the flame was shown on tv and a friend was quite excited because it was going to pass right by her house I began to think that it was quite a momentous occasion and asked if I could go and watch it with her.

It turned out to be one of those rare days – bright and sunny – which made it easier to get up, get dressed and have breakfast in time to arrive at her house uncharacteristically early for me, 8 am. There was a convenient bench by the side of the road near the house and so we went to sit on it and chatted with neighbours as we waited for the show to begin. 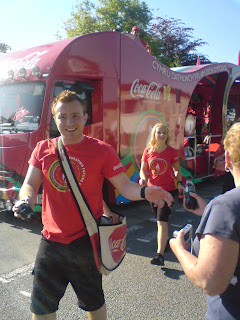 The razzmatazz started – rather bizarrely – with the police. Three of them roared up on huge motorbikes, blue lights flashing and positioned themselves across the road. Then came a Coca Cola bus and a Lloyds Bank bus full of smiling young people - it seemed churlish to entertain thoughts of how inappropriate it is for Coca Cola to be promoting a sports event or to consider  the disaster that is Lloyd’s Bank so I suspended my cynicism and waved with the rest. (At least the Coca Cola bus had cleaned up its emissions I was glad to see.)

While waiting for the torch-carrier to appear I chatted to one of my friend’s neighbours who informed me that he was a semiotician. “What’s that?” I asked. “That’s what most people say”, he replied, “It’s the study of signs”.  I thought that sounded interesting and rattled on to him about how I’d been thinking lately about how metaphor is endemic in language; how almost everything is described in terms of something else (although often we are not aware of it), meaning that thought reflects the interrelationship of things. “Ah yes”, he replied, "Roland Barthes said 'no sooner is a form seen than it must resemble something: humanity seems doomed to analogy'", adding that he himself thought it was a positive thing rather than a doom. Nietzsche also had something to say about this, I learnt, for instance: “The drive toward the formation of metaphors is the fundamental human drive, which one cannot for a single instant dispense with in thought, for one would thereby dispense with man himself”.

At this point the conversation was interrupted by shouts hailing the first glimpse of the torch-bearer, flanked by assistants. 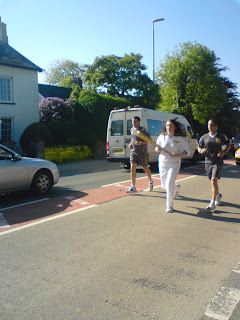 The handover of the flame happened just beside us, where the next runner was waiting, leaving her predecessor recovering from the exertion and the emotion of the event. 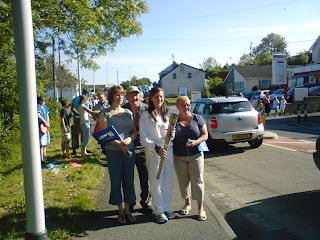 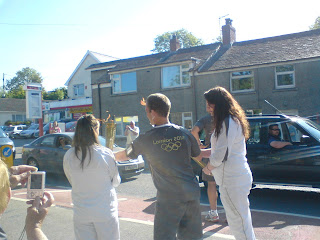 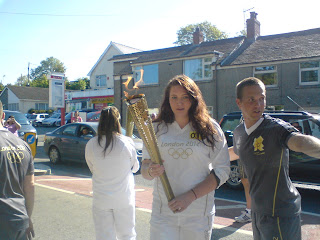 After all the excitement, my friend invited her neighbours and myself back for early elevenses and we sat in the garden in the heat of the morning with coffee and biscuits, chatting and joking. I’d have liked to have learnt more about semiotics but didn’t want to hijack the conversation by being nerdy :-)

Later, back home, I did a bit of research, finding an online introduction to the subject by my erstwhile informant, Daniel Chandler, Semiotics for Beginners. I haven’t read the whole book and have only a superficial grasp of the subject, but what I did understand appealed to me:

Humans might be described as meaning-makers - Homo significans; we are driven by a desire to make meaning which we do through our creation and interpretation of signs. Signs can be words, images, sounds, odours, flavours, acts or objects which only have meaning when we invest them with it.
Semiotics isn’t a discipline but a mode of inquiry. It’s important because it helps us to see that reality is in fact a system of signs and doesn’t have an independent, objective existence.


“Studying semiotics can assist us to become more aware of reality as a construction and of the roles played by ourselves and others in constructing it. It can help us to realize that information or meaning is not 'contained' in the world or in books, computers or audio-visual media. Meaning is not 'transmitted' to us - we actively create it according to a complex interplay of codes or conventions of which we are normally unaware. Becoming aware of such codes is both inherently fascinating and intellectually empowering.”  Deconstructing and contesting the realities of signs can reveal whose realities are privileged and whose are suppressed. The study of signs is the study of the construction and maintenance of reality. To decline such a study is to leave to others the control of the world of meanings which we inhabit.”

The chapter on Rhetorical Tropes I found the most interesting since poets have to choose, as Coleridge stated, not only words in the right order, but the right words in the right order. A poem is often quite short (compared to a novel for instance) and therefore has to signal its meaning in fewer words. The words are potentised in order to have the most impact and this potentisation is often achieved by metaphor – by signs - indeed, the whole poem may be a metaphor. The interpretation of these signs, the decoding, depends on the reader who gives meaning to the text. What this meaning will be depends to some extent on whether he or she is part of the culture the text has come out of and understands its conventions.
Inevitably, some signs will have individual significance for the reader – or indeed for the poet. It’s interesting in the poetry reading group I go to, how one person’s reading of a poem might be very different to another’s - or there again, skewed slightly - by an individual association of an experience with a particular object or sign.


Umberto Eco, I learnt, uses the term ‘semiosis’ to mean the process involved in a culture producing signs and attributing meaning to them. Although a social endeavour, he has recognised that an individual may use semiosis and that subjectivity will play a part in this. I recognise this in my own poetry where an object or act or experience will have a particular significance, potent to myself, but may be too personal to communicate that significance to the reader. (Poetry workshops are particularly useful, I find, in testing out whether or not a metaphor is too personal to contribute meaningfully to a poem.) But some of the best poetry works by extending the agreed meaning given to a particular sign in a highly-individual or personal way which is yet  comprehensible to the reader. Sometimes this meaning is almost out of our range and yet potent and evocative, stretching us, expanding our understanding in a thoroughly satisfying way.

I’m not sure now that I’m doing anything more in my musing than turning the same soil with a different tool, so I’ll stop :-)

To go back to my original recognition that metaphor is embedded in language and that we think about things and give meaning to things by associating them with other things… my feeling is that this connects us to everything – we are not separate and we cannot think separately. We know, at the level of thought, that we are part of everything else. Daniel Chandler says in his book  “tropes [figures of speech] can be seen as offering us a variety of ways of saying 'this is (or is like) that'". The Sanskrit Chandogya Upanishad goes further, saying, Tat Tvan Asi, ‘That thou art’ or ‘Thou art that’ –  the Self is identical with Ultimate Reality, the ground and origin of all phenomena, ‘the ten thousand things’.

As for the Olympic Flame – what a wealth of meaning and cultural associations! Reminiscent of Prometheus’ theft of fire from the god Zeus to give to humans, it was kept burning during the ancient Olympic games in Olympia, Greece. Our contemporary ceremony with the relay of the flame from Greece to the site of the current games was instigated in 1936 by the Nazis… the perpetrators of one of humanity's darkest hours. The flame is kindled in Olympia by the rays of the sun (through a parabolic mirror) – a ‘pure’ form of fire reminding us, perhaps, of the Olympian god, Apollo, a beardless, athletic youth associated with the sun. It celebrates the living flame, passed from generation to generation, as we once again display the physical prowess and fortitude of the human animal.

Put like that, it does feel quite momentous that it passed through the village of Bow Street and was handed over opposite the local Spa shop – a meeting of the global and the local, the mundane and the mythical, the past and the present. And how interesting to meet the neighbours!