Sour-apple hag, a winder of string 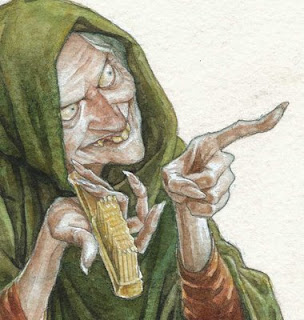 Translated by Gwyn Williams
Yesterday, the blot on my kitchen being too large to be ignored, I spent some time cleaning and idly thinking of this excerpt from a poem about an unnamed hag by Madawg Dwygraig, a 14th century Welsh poet. There is something almost attractive about her foulness – in the way things or people which are perfectly themselves have a kind of beauty. The language of the poem with its harsh ‘ll’, ‘ch’ and ‘c’ sounds almost mimics a kind of hissing and spitting though and I don’t think Madawg Dwygraig’s intention was to portray her in a favourable light! (He also wrote an extremely nasty poem about Mallt, the Irish mother of the poet, Gryffudd Gryg, a contemporary of his.)
The englyn made me think about Jenny Joseph’s poem Warning which describes an old woman, rather genteel in comparison with our gwrach, who merely does such things as wearing purple with a red hat that doesn’t go, spending her pension on brandy and summer gloves and running her stick along public railings “to make up for the sobriety” of her youth (although she does want to learn to spit). Joseph wrote it when she was still a young woman and the poem is a reminder or warning to have some fun while you’re young, to do what you’d like to do sometimes, dare to be unconventional or - God forbid! – a teeny bit rebellious, doing things like running your stick along railings .
Our 14th century hag would not have had the luxury of a pension and reading about hags of the eighteenth and nineteenth centuries I wonder if some old women who didn’t have husbands or families fostered the image of the witch with magical powers to protect themselves. People would give them food and clothing when asked, out of fear that they would blight the crops or curdle the milk. Sometimes though this would backfire and they would be attacked or killed.
Jane Pugh, telling the story of an old woman cornered in Llanidloes, writes: ‘It was the year 1839 and witches were a favourite topic in Wales, as well as all over Britain and many poor old women came under suspicion, harmless though they might be. They only had to be old, wrinkled and ugly with a prominent nose and life became very hard for them as if in those days it was not hard enough for the poor. Few old women ventured very far from their homes and most avoided town at all costs, just in case someone started up a cry of “witch”.’ 1 Apparently in Wales only three witches (four were convicted but one escaped) were hanged during the time of the Penal Witchcraft Act of 1563 – 1736; this was a very small number compared to those hanged or burned in England and Scotland. There is, however, no record of how many were killed without trial.
Hags do, of course, appear in mythology and folk-tales where they are often powerful figures, sometimes conferring sovereignty on the young hero. The hag is, in fact, a symbolic figure, drawing her power ultimately from the archetype of the Terrible Mother. The hag is the female figure, no longer fertile with life-giving qualities, but associated with death and destruction. However she is still one aspect of the Great Mother who is allied to the Land and the king rules only with her approval. There is perhaps an echo of this concept in the Mabinogi story ‘Peredur, Son of Evrawg’ where nine hags are ravaging the land and Peredur gets the better of one of them in a fight. She teaches him to ride and bear arms and then gives him a horse, weapons and armour. There are stories from Ireland in which the hag appears to a young man and when he kisses her, transforms into a beautiful maiden and confers the kingship upon him.

The hag seems a fitting figure to associate with sovereignty. The maiden is attractive to the young hero and therefore he wants to possess her. She in turn would have been driven by social imperatives as well as by biological ones to appeal to young men, and therefore her actions and behaviour were intrinsically linked with his. There were not many jobs open to a young girl in ancient Ireland; even though women could become poets, lawyers, healers etc they were rare and special circumstances probably prevailed. Before Christianity, which at least offered the alternative of becoming a nun, the role of wife and mother was probably the main or only pathway open to a woman, which made her dependant on being chosen by a man. The hag, however, was another matter. Not being attractive to the young hero she was not bound to please him and had greater freedom to please herself. She was sovereign, in the sense of independent, and he had less power over her. Perhaps because of this she seemed more threatening.
Our ‘stalk of an old hag’, being unnamed and therefore having no identity, takes on mythic proportions. She is a ‘winder of string’, reminiscent of the old women known as the Moirae or Fates of Greek mythology who controlled the destinies of each person: Clotho would spin the string that represented the life of the person, Lachesis would decide the length of it and Atropos would cut the string at the appointed time, signifying the end of the person’s life. The three Fates were, inevitably, very powerful and instilled fear even in some deities. Maybe the winding of string and wool was a job particularly suited to old women and that is why they became associated with it.

Whoever she was, this sour-apple hag had enough power to get under the poet’s skin to the point where he thought it worthwhile to spend his time and skill on composing a very accomplished poem of seven englynion to her, each line beginning with the word gwrach and the end-rhyme remaining the same throughout. Perhaps she was his mother-in-law?