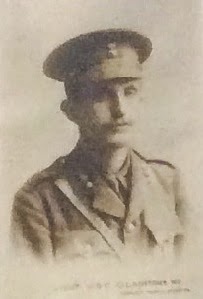 As mentioned below, during a recent stay at Gladstone’s Library in Hawarden, Flintshire, I went to view a WW1 exhibition in St Deiniol’s church which is next to the Library. I was interested to see that there was a board on the Royal Welch Fusiliers. As well as learning more about Robert Graves’s regiment, which recruited primarily from North Wales, I was delighted to find that R G had known Gladstone’s grandson, also a Royal Welch Fusilier, and had attended his funeral in Hawarden in 1915. After looking round the exhibition, I went back to the Library to find a copy of Goodbye to All That and locate the passage where he is mentioned:

From Goodbye to All That:

“Of the officers sent out before me, several had already been killed or wounded. The killed included a Liberal M.P., Second-Lieutenant W. G. Gladstone, whom we called ‘Glad Eyes’. He was in his early thirties, a grandson of old Gladstone, whom he resembled in feature, and Lord-Lieutenant of his county. While war hung in the balance he declared himself against it, whereupon his Hawarden tenantry, much ashamed, threatened to duck him in the pond. Realising that, once war was declared, further protest would be useless, he joined the regiment as a second-lieutenant. His political convictions remained unaltered, but, being a man of great integrity, he refused to take the non-combative employment as a staff-colonel offered him in the War Office. Soon after joining the First Battalion in France he was killed by a sniper while unnecessarily exposing himself. General French sent his body home for a military funeral at Hawarden; I attended it.”   (GTAT, Penguin Books, 1985, p 66)

I was told by the head of the Tourism Committee of St Deiniol’s Church, who had organised the exhibition, that William Glynne Gladstone was particularly tall so that when he was standing in the trench his head was above the parapet. The sergeant told him to duck down but he said “I can’t do that. The men will think I’m in a funk”. Consequently he was shot. She also told me that, although it was usual for officers to be buried with their men, a special dispensation from the king allowed him to be brought home to be buried in the churchyard at Hawarden. Here are some photos from the exhibition: 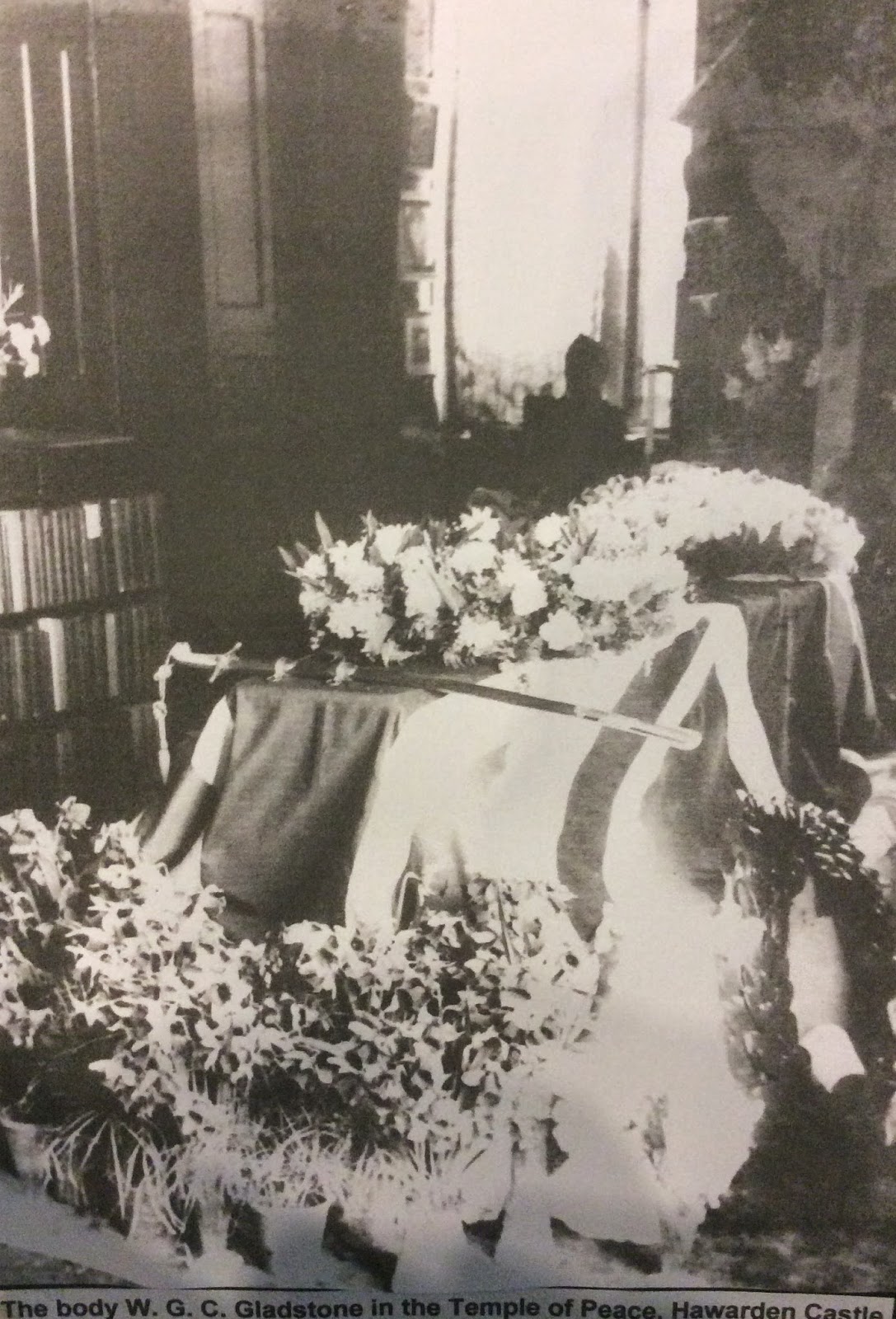 The body of W. G. C. Gladstone in the Temple of Peace, Hawarden Castle 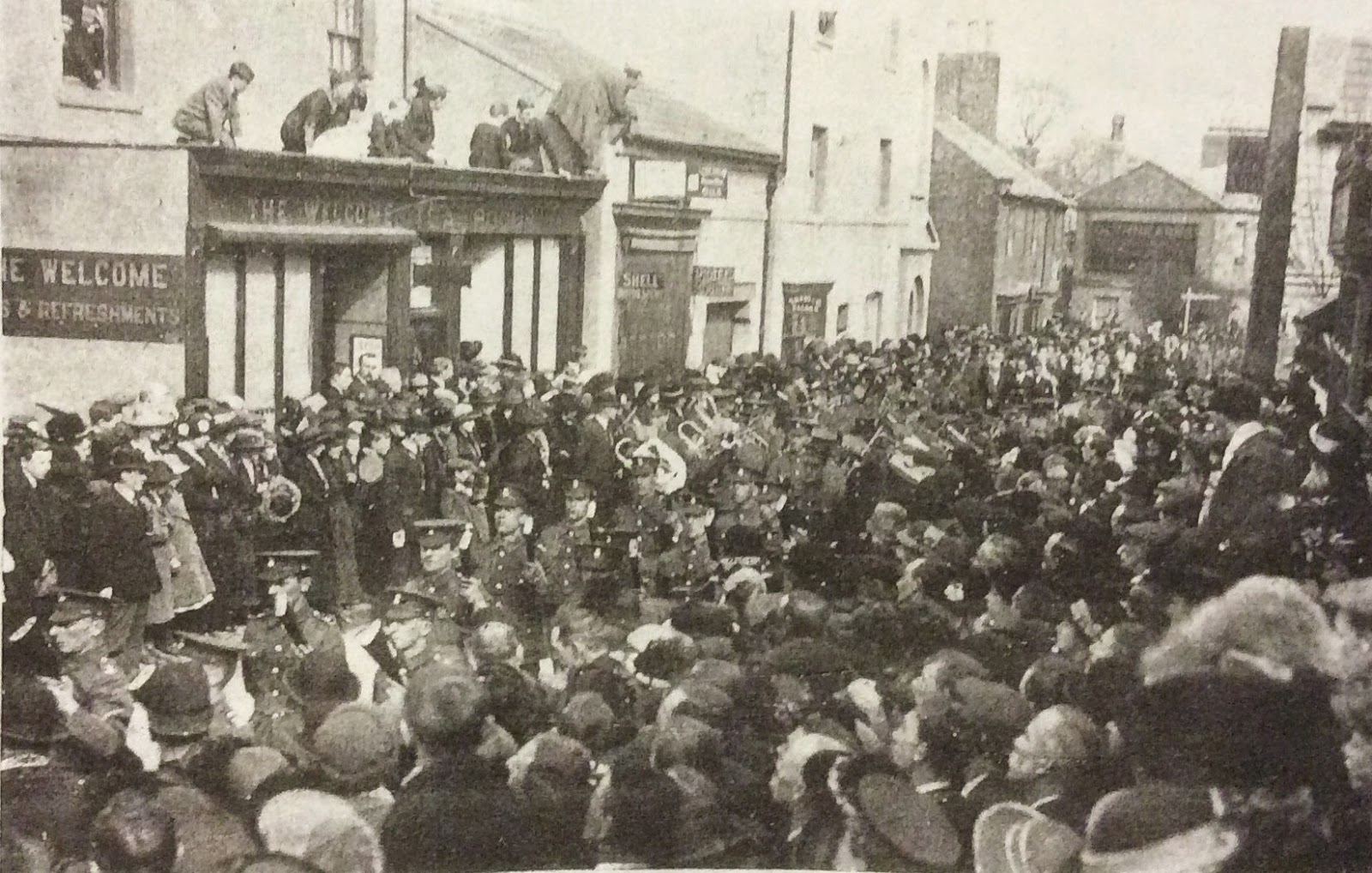 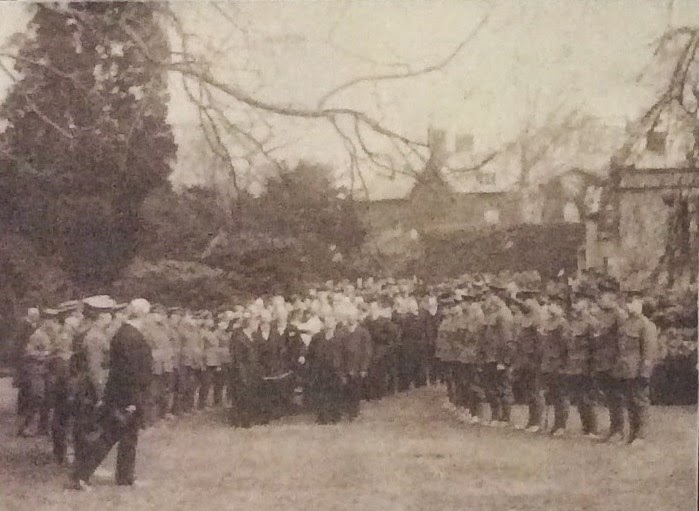 Brothers-in-Arms pay their Tribute in the churchyard.

The last scene in the peaceful old churchyard. All the villagers were there to mourn the young soldier squire.

I had hoped to be able to identify Robert in the photos but they aren’t detailed enough. Still, it was good to think that he is there in them somewhere.

Unfortunately the name of the member of the Tourism Committee of the church who provided these photographs and the information is obscured by poppies in the photograph I took of the complete board, but I am grateful to him or her for their research.