I thought I'd show you some of the lovely things that are happening in my garden at the moment... (Click to enlarge.) 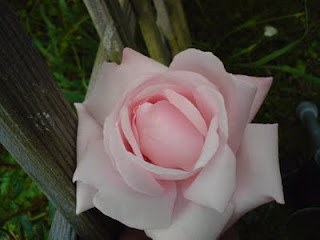 The peerless beauty of the rose - this one is the New Dawn. I planted it by the trellis I put up on the east side of the garden last year and it has grown wonderfully. I've planted honeysuckle and clematis as well as by the trellises but the roses are the only plants that have taken off - I think they like the chicken poo... 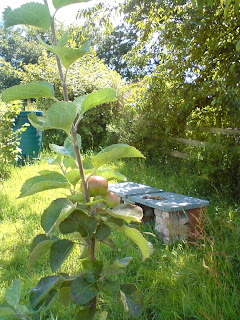 There were no apples on the Bramley last year and I thought I might have to get another pollinator - it needs two and I only have one, a Fiesta (child of a Cox's Orange Pippin but more disease resistant). However this year there are several apples so something in a neighbour's garden must have done the trick. Both types of apple are good for storing - important when you have more than you can eat. 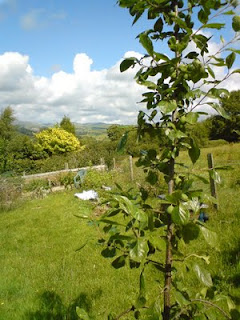 The Victoria Plum has fruit on it for the first time too! 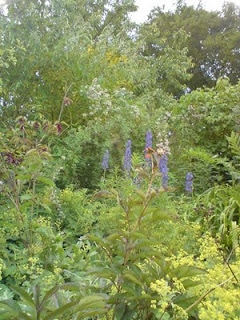 This is a particularly lovely part of the garden. It begins in the spring with solomen's seal and continues with monkshood, hypericum, peony, cornflowers as well as the ubiquitous lady's mantle which is on a mission to take over my whole garden... Orange lillies are slowly ripening now. 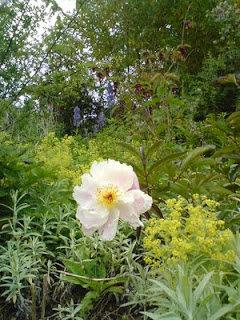 Here's a pink peony I caught before the rain demolished the petals.

Last year I threw down some wild flower seeds from an old packet on a bare patch at the top of the garden. They grew and corn cockles were a joy to see. I hoped they might seed themselves and come again this year but unfortunately not. However, there are masses of white campion as a consolation.


The strawberries are rich red jewels hidden among the green leaves. Picking them is like a treasure hunt! Last year's plants extended themselves into a big plot so I've got a good crop.They taste like strawberries used to taste when I was a child. I wish I'd noted what type they are.

I only grow a few token vegetables on a small area I can easily manage myself. It's on top of a wall that runs along the patio at the bottom of a slope. Last year the leeks and swiss chard were very successful - this year, for some strange reason, the slugs have eaten 13 of my 17 leeks... and the perpetual spinach is spindly with small leaves.
One cauliflower grew huge and then fell over and subsequently died in the strong winds we had a few weeks ago. The other has been largely eaten - although the white flower in the centre is growing; it won't come to much but I've never grown cauliflower before so I'm interested in seeing it. I've a few dwarf beans in a container but they're not doing much - so, not a good year for vegetables. There is one courgette plant which has two forming nicely and the purple-sprouting broccoli above is looking promising... but I think the slugs have found it. (Yes,those are rosebay willow herb and yes, it was a mistake to leave them - but they are so beautiful!)

The most exciting thing is the new pond! More of that - and its guardians - another time.
Posted by Hilaire at 17:02