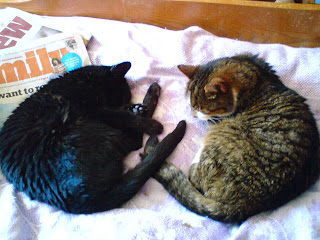 It's been a difficult time recently with some sad and challenging events. One of these was the death of  my cat Ash, companion of 20 years. My other cat, Willow, died last year at the age of 17. In the picture above you can see them both in happier times curled up on the end of my bed on a Sunday morning while I read the Saturday Guardian - an enjoyable Sunday morning ritual.

I remember  Chris Hamilton-Emery of Salt Publishing saying in his submission guidelines to avoid sending poems on the death of your cat, mother or Biology teacher. (Or how crap your life is. Or about bee-keeping). Happily some people have written poems when their cats have died - notably perhaps, Thomas Hardy who treated the subject with the seriousness it deserves and in doing so touched on more general themes of dealing with loss and the presence of absence.

Last Words to a Dumb Friend

Pet was never mourned as you,
Purrer of the spotless hue,
Plumy tail, and wistful gaze
While you humoured our queer ways,
Or outshrilled your morning call
Up the stairs and through the hall -
Foot suspended in its fall -
While, expectant, you would stand
Arched, to meet the stroking hand;
Till your way you chose to wend
Yonder, to your tragic end.

Never another pet for me!
Let your place all vacant be;
Better blankness day by day
Than companion torn away.
Better bid his memory fade,
Better blot each mark he made,
Selfishly escape distress
By contrived forgetfulness,
Than preserve his prints to make
Every morn and eve an ache.

From the chair whereon he sat
Sweep his fur, nor wince thereat;
Rake his little pathways out
Mid the bushes roundabout;
Smooth away his talons’ mark
From the claw-worn pine-tree bark,
Where he climbed as dusk embrowned,
Waiting us who loitered round.

Strange it is this speechless thing,
Subject to our mastering,
Subject for his life and food
To our gift, and time, and mood;
Timid pensioner of us Powers,
His existence ruled by ours,
Should - by crossing at a breath
Into safe and shielded death,
By the merely taking hence
Of his insignificance -
Loom as largened to the sense,
Shape as part, above man’s will,
Of the Imperturbable.

As a prisoner, flight debarred,
Exercising in a yard,
Still retain I, troubled, shaken,
Mean estate, by him forsaken;
And this home, which scarcely took
Impress from his little look,
By his faring to the Dim
Grows all eloquent of him.

Housemate, I can think you still
Bounding to the window-sill,
Over which I vaguely see
Your small mound beneath the tree,
Showing in the autumn shade
That you moulder where you played.

As for the suitability of subjects for poems, surely the quality of a poem depends not on its subject matter but on the skill and inspiration of the poet? In a few days time it will be ten years since my mother died. I haven't written a poem about her death but Patrick Kavanagh's poem in memory of his mother is a fine one I think.


In Memory Of My Mother
I do not think of you lying in the wet clay
Of a Monaghan graveyard; I see
You walking down a lane among the poplars
On your way to the station, or happily

Going to second Mass on a summer Sunday -
You meet me and you say:
'Don't forget to see about the cattle ' -
Among your earthiest words the angels stray.

And I think of you walking along a headland
Of green oats in June,
So full of repose, so rich with life -
And I see us meeting at the end of a town

On a fair day by accident, after
The bargains are all made and we can walk
Together through the shops and stalls and markets
Free in the oriental streets of thought.

O you are not lying in the wet clay,
For it is a harvest evening now and we
Are piling up the ricks against the moonlight
And you smile up at us - eternally.