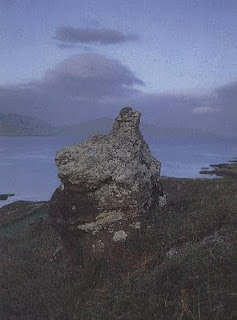 Writing about the sour-apple hag reminded me that I’d meant to tidy up and put on my web site an account of a journey I made in 1997 to visit the Hag of Beara in Ireland. It describes visiting some special places on the Beara Peninsula as well as musing about my own mid-life journey through the rather uncomfortable hinterland between the ages of mother and the hag. So here it is at: Pilgrimage to the Hag of Beara
I used Noragh Jones’ Meditations for Hag Sacred Sites on the Beara Peninsula as a template for the journey and posted that as well. If you are not able to go to the Beara Peninsula it can still work as a guided meditation for the mid-life journey: Meditations for a Hag Pilgrimge

I also ruminated a bit more about the old woman as spinner and winder of yarn, remembering the three hags in the Irish tale of Finn in The Enchanted Cave of Keshcorran. In the story Finn and his band were hunting in Northern Connacht and so incurred the wrath of Conaran, a Danaan lord, who sent his three daughters to capture them:

"Finn, it is said, and Conan the Bald, with Finn's two favourite hounds… came upon the mouth of a great cavern, before which sat three hags of evil and revolting aspect. On three crooked sticks of holly they had twisted left-handwise hanks of yarn, and were spinning with these when Finn and his followers arrived. To view them more closely the warriors drew near, when they found themselves suddenly entangled in strands of the yarn which the hags had spun about the place like the web of a spider, and deadly faintness and trembling came over them, so that they were easily bound fast by the hags and carried into the dark recesses of the cave. Others of the party then arrived, looking for Finn. All suffered the same experience - they lost all their pith and valour at the touch of the bewitched yarn, and were bound and carried into the cave, until the whole party were laid in bonds, with the dogs baying and howling outside." (Silva Gadelica, Standish Hayes O'Grady)

Like the Greek Fates, these three old women are connected with spinning yarn. In this case it is enchanted yarn, having been spun left-handwise, against the course of the sun and hung on holly sticks. The association of hags and spinning yarn, as I surmised in my last hag post, does seem a natural one. Spinning and winding the yarn could be an occupation suited to elderly women since it doesn't require too much exertion or mobility – and it was a skill which was essential to the well-being of the community since it provided the means to make cloth for clothing, blankets, hammocks, bags, rugs, baby-carriers and so on. As an Irish triad says: "Three slender things that best support the world - the slender stream of milk from the cow’s dug into the pail, the slender blade of green corn upon the ground, the slender thread over the hand of a skilled woman." These crafts are believed to be among the earliest and most primitive invented: there is evidence of woven articles from Turkey and Mesopotamia 7000 to 8000 BC.

It was a way in which the grandmothers could have been ‘economically viable’ and earned their keep. I can imagine it being quite pleasant – women perhaps getting together and working while chatting, gossiping and… spinning a few yarns. Some of the matters of the community were no doubt chewed over and some things set in train that might well have affected the fate of some of its members – marriages decided upon, a word here and there in the ear of a son or son-in-law about the suitability of someone for this task or that.

The Grandmother Hypothesis suggests that there is some evolutionary advantage for women having such a long post-fertile period; that there is some 'genetic intention' for postmenopausal women. Some anthropologists believe that the human species took a leap forward when people started living long enough for grandmothers to survive and be able to look after the children – thus freeing their sons and daughters to do other work: hunting, gathering, building shelters, fetching water and so on. Others dispute the hypothesis, arguing that the grandmother herself would use up resources that could be used for new young. But perhaps spinning, winding yarn and weaving were also their contribution?

There is evidence from all over the world of old people being dispatched or abandoned when they became a burden by consuming resources without contributing anything in return. David Rorie gives some interesting examples from Scotland, England and Brittany which suggest that once violent acts may have given way to ritual and incantation. Also interesting is the association with cranes. In Easter Alves, in Morayshire, there is an account of ‘ringing the Millen Bridle’ – a method by which the death of a sick old woman was hastened. It seems likely from the account that the Bridle – whatever it was, for the word in Scottish may refer to a particular piece of wood used in carpentry or the piece of iron fastened on the end of a beam of a plough as well as the more familiar meaning – was kept by a guardian and during the ‘ringing’ of it, a magical formula was recited:

Campbell, in The Superstitions of the Scottish Highlands recounts that if someone is thought to have lived too long and it is desirable to get rid of them, their death may be brought about by shouting three times through the key-hole of his room:

Will you come, or will you go?
Or will you eat the flesh of cranes?

Anne Ross states that according to Julius Caesar in the first century BC the ancient Britons refused to eat the flesh of cranes in case it had been human in an earlier life and Giraldus Cambrensis (12th cent.) observed the same taboo in Ireland.

In Brittany there is a report of an elaborate ceremony to hasten the end of an old person by use of er mel béniguet, the holy hammer. The beadle of the chapel was the guardian of the hammer which was kept in the recess of the church wall. When it was brought to the sick person’s house, the oldest person, a woman, held the stone to her chest, bent by the weight of it, and made the sign of the cross with her right hand three times and then raised the stone above her head: “waving it and saying: ‘Mathô-Talen, for the last time commit they soul to God, for here is what will relieve thee from the agonies of death, and lift from thee the burdens of life’. The ends of his fingers having been wet with holy water, he slowly made the sign of the Cross with the right arm. Lowering the stone little by little with both hands, she at last placed it gently on his forehead, steadying it with her left. Then again raising her right, she cried in a shrill voice: ‘By the Holy Trinity, in the name of the Father, the Son and the Holy Spirit, thanks to the holy hammer of Saint Meltro, the deliverer of the aged, rest in peace, Mathô-Talon, for thou hast lived well!’ Hardly had she finished when the old man drew his last breath: his limbs stiffened and he gave up the ghost while saying, ‘God be thanked!’” There were known, apparently, several such ‘holy hammers’.

Aubrey gives a similar account from seventeenth century England where a ‘holy mawle’ was hung behind the church door and when a father was seventy and of no more use, the son could fetch the hammer and knock the father on the head with it.

Rorie notes, “the word for hammer or maul (mell) is the same in both Scots and Breton, and it brings us in touch with the ‘millen’ of the ‘bridle’; for ‘to mill’ in the Scottish vernacular, is ‘to give one a beating, to drub’. *

On a rather more heart-warming note, here is an Irish example of a wide-spread folk motif of grandchildren coming to their grandparents’ aid:

'A man had a father who had grown too old to do anything but eat and smoke, so the man decided to send him away with nothing but a blanket. "Just give him half a blanket," said the man's son from his cradle, "then I'll have half to give you when you grow old and I send you away." Upon hearing this, the man quickly reconsidered and allowed his old father to remain after all.' (Irish Folktales, Henry Glassie)
* All accounts above from David Rorie, Folk Tradition and Folk Medicine in Scotland unless specified otherwise.
Posted by Hilaire at 17:41