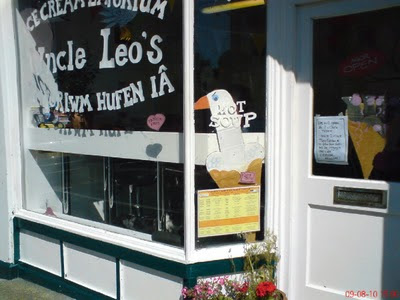 Well, I haven’t got on very well with my piece about St Ffraid… I changed a sentence and went to the university library to get a copy of The Holy Wells of Wales but that was it for last week. Ah well, I still like to have a plan, even if I don't stick to them.

However I did have an enjoyable time socialising. I’ve been to my favourite café – Uncle Leo’s Ice-cream Emporium – with friends a few times. They serve tea there in old-fashioned teapots with china cups and saucers and plates that don’t match. I tend to like things that don’t match; I seem to have an overall bias towards diversity.

Their tiny scones with cream and home-made jam are delicious and they also have Victoria sponge which is currently my favourite cake (it used to be carrot cake). 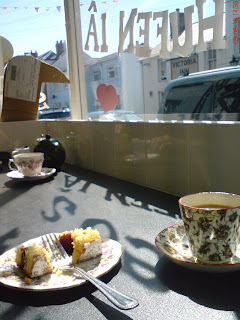 Because there were some sunny afternoons I took a book outside to read - Dark Speech: The Performance of Law in Early Ireland by Robin Chapman Stacey. You can’t separate the law from poets and poetry in early Ireland so every chapter is packed with information and insights that I found quite thrilling (sad but true). There is a lot about rosc – the archaic non-syllabic verse which is interspersed with the prose in the Cauldron of Poesy text – so that will help me to sharpen up and bring into a better focus what I have said about it in the first part of my article - which I thought I had finished!

I also went to see the film Wild Target which I enjoyed – it was a British action comedy, rather like the old Ealing comedies. In fact it was a bit like The Ladykillers which is one of my favourite films.

I also went up to Sheffield for an unexpected visit to my son and his family. As the journey takes me through Llansantffraid ym Mechain I was able to call in at the church – which I last visited about 12 years ago. I wanted to take a picture of the windows showing St Ffraid to add to my web article. I plan to go down the coast a few miles this week if it isn't raining and take another photo of the window at Llansantffraid church, Llanon. I’ll post them next time.

Meanwhile, back to the café – I have a plan to meet up with a friend and go there for a quiche one evening. Then it’s less than a stone’s throw over the road to the Victoria Inn where we can have some Guinness and sit on the beach. How wonderful it is to live so near the seaside! I hope to get on with the writing again this week though… 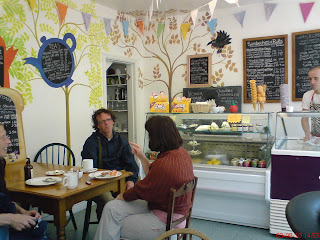 Three of my favourite things: tea, cake and discussion.
Posted by Hilaire at 14:58