At the time of first fruits 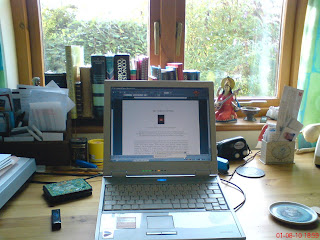 At this time of first fruits I thought I'd write about various projects I've been working on lately. I've been feeling frustrated that none of them have ripened into fruition but perhaps it is better to look at it another way - as the work so far being the first tender fruits.

The Cauldron of Poetry is is the most important; I’ve been working on it for nearly a year on and off and have been intrigued by this Irish text about cauldrons and poetry for well over a decade. It's going to be in three parts and I have actually finished the first draft of the first part - the most challenging for me. It is an exposition of the text. The second part will look at the symbol of the Celtic cauldron and the meanings that have accrued to it. I have this in note form.

The third part is not yet started – it will look at how some of the ideas of the first two parts – as well as some other ideas and practices of early poetry – may be used today. I expect this part to be the easiest and most exciting as it will flow from what has come before and won’t involve checking facts and referring to other texts all the time.

There were times when I really questioned why I was working on this, what on earth was the purpose of it. But at one point, reading around the subject, I had a moment of epiphany when I felt that my spiritual life and my poetic life were beginning to converge and this writing about the Cauldron was part of the journey to that union. Whether this will turn out to be the case or not, I’m not sure. Sometimes these intense moments of inspiration are not realised – but obviously I still have to follow it to its conclusion and see what happens.

St Brigit in Wales: Sant Ffraid - I decided to write about Sant Ffraid because I was looking on-line to give a link to some information about her on my web site and found very little. In theory this piece of work shouldn’t take very long as I have most of the information I need. In theory!
Poetry and the Otherworld: this is a working title and is almost written but exists only in my head – nothing on paper yet except some quotes from modern poets which I’ve collected. It’s about where poetry comes from and why early societies connected it with seership and the Otherworld. Sometimes today poets report that they hear poems which appear mysteriously. I’ve had this experience myself many times and part of the piece will describe a personal experience of working with Malidoma Somé, an initiated elder of the Dagara tribe of Burkina Faso, Africa. I wanted to attend some of his workshops after reading his books and thinking that the Dagara were a people actually living a lot of the practices of the early Celts (and their more recent folklore traditions). I had my most complete experience of a ‘received’ poem during this time, as well as gaining other insights into a possible connection between poetry and seership in early societies.
There are more articles I've planned or researched or started to write but these are the three I want to concentrate on and then I intend to have a break from prose and non-fiction and spend more time on poetry.
I've a busy week this week, mostly socialising! But I hope to finish the piece on Sant Ffraid - I'll update my progress next week. It would be lovely to say I'd finished it and then I could move on... What I should like to do then is finish Poetry and the Otherworld and the second part of the Cauldron by Calan Gaeaf/Samhain. There's a plan... I always like to have a plan...
Posted by Hilaire at 13:00