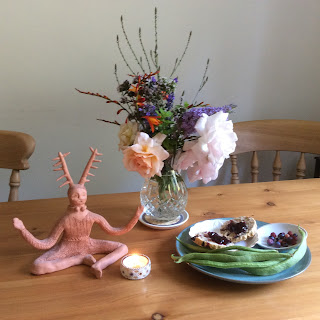 Although I haven’t seen any precedent for it, I celebrate Cernunnos at Lughnasad. This arose as a purely intuitive act but I realise that it makes sense in many ways. First of all, for me personally, since Lughnasad completes the growth cycle of the interaction of the Land with the People begun at Imbolc when Brigit presides over the initiation of the growing season, it places Brigit and Cernunnos at opposite sides of the circle of the year, a symmetry I find pleasing as these are the two divinities I engage with. Secondly it makes sense in terms of what I have come to believe about Cernunnos. As I’ve written before (see the sidebar where they usually appear as some of the most popular posts), I consider that Cernnunos is a very ancient god dating back to the time when our ancestors were hunter gatherers. Lugh, who shares some attributes with him, I believe comes from the time of the rise of agriculture. The festival of Lughnasad celebrates Lugh, the hero of the harvest, who, in the different stories told about him, wrests it from the hostile forces of nature (the Fomorians or the Cailleach) through various means - battle, skill, strength or trickery.

The work of the hunter gatherers, however, would have been on-going throughout the year, rather than tied to the growing season and the final harvest. Cernunnos being not only a Lord of Nature but also a mediator god, allows humans to access the abundance of nature and keeps the destructive forces at bay. In exchange he would expect offerings and worship. The model here then is not that of a battle between human beings and nature but one of exchange, reciprocity and mutual respect.

The Hunting Blessing and Carmichael’s commentary in the Carmina Gadelica give some idea of the ritual aspect of hunting, the anointing of the hunter and the calling on divine beings, along with the restraint necessary to ensure the stock of animals and birds was not depleted thus achieving a balance with nature:

A YOUNG man was consecrated before he went out to hunt. Oil was put on his head, a bow was placed in his hand, and he was required to stand with bare feet on the bare grassless ground. The dedication of the young hunter was akin to those of the 'maor,' the judge, the chief, and the king, on installation. Many conditions were imposed on the young man, which he was required to observe throughout life. He was not to take life wantonly. He was not to kill a bird sitting, nor a beast lying down, and he was not to kill the mother of a brood, nor the mother of a suckling. Nor was he to kill an unfledged bird nor a suckling beast, unless it might be the young of a bird, or of a beast, of prey. It was at all times permissible and laudable to destroy certain clearly defined birds and beasts of prey and evil reptiles, with their young.

The white swan of the sweet gurgle,
The speckled dun of the brown tuft,
Thou shalt not cut a feather from their backs,
Till the doom-day, on the crest of the wave.

Thou shalt not eat fallen fish nor fallen flesh,
Nor one bird that thy hand shall not bring down,
Be thou thankful for the one,
Though nine should be swimming.

The fairy swan of Bride of flocks,
The fairy duck of Mary of peace.

How far we have come from this kind of honouring and restraint in our own dealings with nature! As I’ve said before, I believe that we modern humans have Lugh’s strength, skills and ingenuity in abundance and are aggressively continuing to subdue nature and ensure plenty (for some) in a way that doesn’t have anything to do with honour, respect or reciprocity and which is leading to a great extinction of species, depletion of the earth’s resources and will likely to lead to our own downfall.

There is a danger of course of romanticising the past (Carmichael himself may have embellished some of the material he collected) and taking for granted the many benefits of the present but I see no harm in being inspired by elements of the past to create a vision that pays tribute to both Cernunnos and Lugh; which acknowledges our strength, skills and ingenuity but combines them with honour and respect for the true source of all our abundance and the maintenance of a balance between us and nature - since there is nothing we have that does not come directly or indirectly from Earth and Sky. The way we are moving at present is a far cry from this vision but I consider it necessary to maintain it and try to bring it into reality even in small ways. Divergent thinking - as diversity in general - becomes useful, if not vital, when circumstances and situations change; a strategy for survival.

So imperfectly, but doing the best I can, I am trying to take care of the land I have in a way that is respectful, that does not destroy or resort to overkill, that gives something back to the earth and allows a share of the harvest to some of the creatures that inhabit this little patch too. An honouring of Cernunnos keeps me mindful of this.

I wear a mask during the rites. It’s something instinctive - I’d never wear a mask for Brigit - but somehow in doing so I become self and not-self and feel as though I can relate to Cernunnos better in an in-between state. The mask is green with a suggestion of foliage so I take on an aspect of the Wild that we come from. An aspect of the Other which is also Ourselves