The Story of Brigit at Christmas 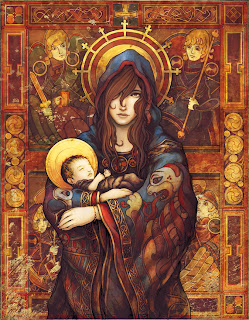 Bride, Midwife to Mary, Foster-Mother of the Divine Child

It is said that Bride was the daughter of poor pious parents, and the serving-maid in the inn of Bethlehem. Great drought occurred in the land, and the master of the hostel went away with his cart to procure water from afar, leaving with Bride 'faircil buirn agus breacag arain,' a stoup of water and a bannock of bread to sustain her till his return. The man left injunctions with Bride not to give food or drink to any one, as he had left only enough for herself, and not to give shelter to any one against his return.
As Bride was working in the house two strangers came to the door. The man was old, with brown hair and grey beard, and the woman was young and beautiful, with oval face, straight nose, blue eyes, red lips, small ears, and golden brown hair, which fell below her waist. They asked the serving-maid for a place to rest, for they were footsore and weary, for food to satisfy their hunger, and for water to quench their thirst. Bride could not give them shelter, but she gave them of her own bannock and of her own stoup of water, of which they partook at the door; and having thanked Bride the strangers went their way, while Bride gazed wistfully and sorrowfully after them. She saw that the sickness of life was on the young woman of the lovely face, and her heart was sore that she had not the power to give them shade from the heat of the sun, and cover from the cold of the dew.

When Bride returned into the house in the darkening of the twilight, what was stranger to her to see than that the bannock of bread was whole, and the stoup of water full, as they had been before! She did not know under the land of the world what she would say or what she would do. The food and the water of which she herself had given them, and had seen them partake, without a bit or a drop lacking from them! When she recovered from her wonderment Bride went out to look after the two who had gone their way, but she could see no more of them. But she saw a brilliant golden light over the stable door, and knowing that it was not 'dreag a bhais,' a meteor of death, she went into the stable and was in time to aid and minister to the Virgin Mother, and to receive the Child into her arms, for the strangers were Joseph and Mary, and the child was Jesus Christ, the Son of God, come to earth, and born in the stable of the hostel of Bethlehem.

When the Child was born Bride put three drops of water from the spring of pure water on the tablet of His forehead, in name of God, in name of Jesus, in name of Spirit. When the master of the inn was returning home, and ascending the hill on which his house stood, he heard the murmuring music of a stream flowing past his house, and he saw the light of a bright star above his stable door. He knew from these signs that the Messiah was come and that Christ was born, for it was in the seership of the people that Jesus Christ, the Son of God, would be born in Bethlehem, the town of David. And the man rejoiced with exceeding joy at the fulfilment of the prophecy, and he went to the stable and worshipped the new Christ, whose infant cradle was the manger of the horses.

Thus Bride is called 'ban-chuideachaidh Moire,' the aid-woman of Mary. In this connection, and in consequence thereof, she is called 'Muime Chriosda,' foster-mother of Christ; 'Bana-ghoistidh Mhic De,' the god-mother of the Son of God; 'Bana-ghoistidh Iosda Criosda nam bane agus nam beannachd,' god-mother of Jesus Christ of the bindings and blessings. Christ again is called 'Dalta Bride,' the foster-son of Bride; 'Dalta Bride bith nam beannachd,' the foster-son of Bride of the blessings; 'Daltan Bride,' little fosterling of Bride, a term of endearment.

The Gift of Power

I am the Gift, I am the Poor,
I am the man of this night.

I am the Son of God in the door,
On Monday seeking the gifts.

Noble is Bride the gentle, fair on her knee,
Noble the King of Glory on her breast.

Son of the moon, Son of the sun,
Great Son of Mary of God-like mind.

A cross on each right shoulder,
I am in the door, open thou.

I see the hills, I see the strand,
I see angels heralding on high.

I see the dove, shapely, benign,
Coming with kindness and friendship to us.


May kindness and friendship be upon you this Season of Celebration!