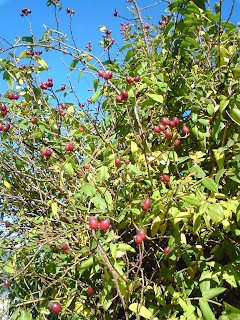 The month of September,
there is verse in the Canon,
the ripening season of corn and fruit; ﻿

The Verses of the Months, Welsh, c 15th century

Yes, September is certainly gone now but I needed to post the verse of the month as it is the last one in the sequence I started last October.

I've felt rather unsettled since coming back from a visit up North to visit family and have been wondering if my life is starting to flow into different channels. I haven't felt like doing much on the computer - partly because I am swapping over to a new one which I have been finding less user-friendly. However, I felt I must post the September verse before October turns into November and a new cycle begins.

For some unknown reason, after I changed a couple of things on this blog format and then changed them back, even though I checked all was as it should be, the next time I logged on the template had been changed to something I hadn't chosen. I've been unable to return it to the simple form I had before so this new layout is the best I can do!