A Magical Day in August 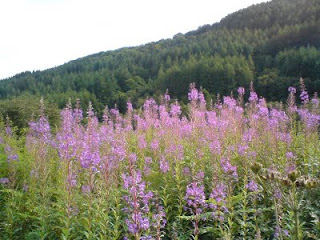 A journey and an unexpectedly magical day out

I’ve been feeling a bit low for the last week - a tiredness I can’t seem to shake off and consequent inability to keep on top of things, chores and paperwork, bureaucracy; mobility a little more difficult, a little more painful. On Wednesday I set off to Llandrindod Wells for a long-standing appointment with the osteopath. I wasn’t looking forward to the drive which takes about an hour and a quarter and planned to go there and come back as quickly as possible.

But…  although it was a dull day with rain beating down on the slopes of Pumlumon as I set off, there were such solid swathes of rosebay willow-herb by the roadsides that they gave off a magnificent deep pink that seemed to vibrate with light in spite of the grey skies.

I arrived uncharacteristically early at Rock Park where the osteopath has her consulting-room. The car-park was full so I decided to drive on into the park to explore a little which I hadn’t done before. The track didn’t go very far and ended in a small parking area by a bowling club. From there, there was a tree-lined path disappearing round a bend, but just at the start of the path was an arresting sight – a grandfather oak, huge, with spreading and curving branches which circled the tree and gave an impression of welcome, of expansiveness, of shelter. Shaken out of my melancholy mood, I went to meet it, exhilarated. 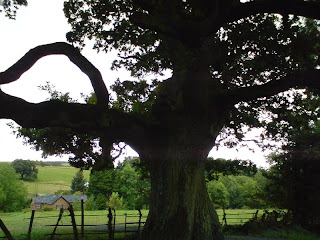 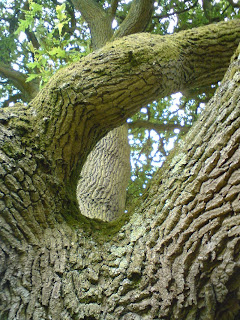 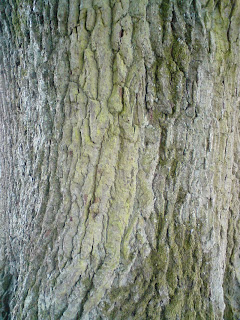 I walked round it and gazed up into its branches, almost overwhelmed by its presence, its solidity but perhaps more than anything by the impression of an openness to the world around it, a willingness perhaps to engage with walkers on the path. After spending some time quietly beside it, I leant my hands, palms out, against its trunk, and asked for some of its strength and solidity. Then, after leaving an offering, I drove back down to keep my appointment, finding a parking-space outside the door.

After my session I decided to go into the town centre and have lunch at the Herb Garden – the place to visit if you are ever in Llandrindod Wells and enjoy good vegetarian food. 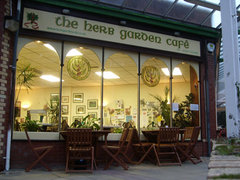 I had a bowl of mixed salads – more varied and exotic than I would ever make for myself – and a granary roll, followed by earl grey tea and an apricot slice. Outside the edges of the path were planted with herbs and rowan trees, their branches hanging low with the weight of their red berries. The excellent food and calm and green surroundings further raised my spirits and leaving I decided to call in at the Oxfam shop two doors down to look for some bedtime reading. I found 4 books but also something totally unexpected… on the bottom shelf of odds ‘n ends was a carving of a horse’s head. I picked it up – hardly able to believe my eyes - it was beautiful, unique because it had been carved into the shape of the wood - something very close-grained, beech perhaps? - a wavy cleft, maybe fungus damage, giving the impression of a mane. 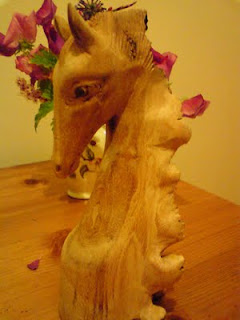 I bought it of course. The person who priced it obviously didn’t see it with the same eyes as me since it was a mere 99p. For me it is one of the most beautiful things I own and since bringing it home I’ve been almost mesmerised by it. It seems to be working on me as a poem sometimes will – as I look at it, it changes angles and perspectives, there’s a tantalising trace of its maker, half-suggestions of ideas and forms and an energy greater than the sum of its part.

It’s difficult to define this energy; it has a haunting, almost wistful quality I think. The eyes of the horse don’t look at me, don’t relate to me directly, and I have a sense of a dignified acceptance perhaps resignation. Perhaps it is the look of Rhiannon as she fulfilled her punishment of carrying guests on her back to the llys.
I don’t actually have a connection with Epona or Rigantona/Rhiannon, the horse goddess, myself, but since she is important to the group Brython I’ve been open to honouring her in a sense at a remove.
For me personally, much of what relates to Rigantona may be found in Brigit/Brigantia, although not always her most important or pronounced aspects. There is some evidence that she has been seen as a sovereignty figure, a bringer of abundance, and a harbinger of the return of warmth and growth to the land - her other face the face of winter. She too has bird associates but where she differs markedly from Rigantona is that her animal is commonly the cow and she has no connection with the horse.

The cow and the horse bring up very different associations. The cow is related to nurturing, food and sustenance, and through these to wealth and prosperity; the horse bequeaths us grace, power, speed, the ability to move over the land. If the cow gives the basics needed for survival, sustenance, the horse goes a step beyond, giving the ability to command territory, to travel, to transport – perhaps, more romantically, to do so with elegance and grace.

I’ve always admired the beauty of horses and am attracted to Celtic depictions of the horse on their coins and jewellery. I have a brooch which is a copy of a bronze plate, 2nd century, Romano-Celtic brooch, inlaid with green enamel and dappled with white spots, found at Verulamium. 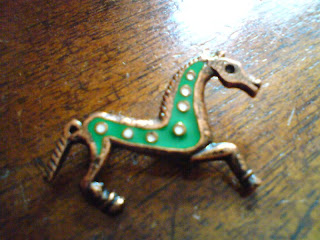 But it does not have the energy of my carving and I wait to see what changes this horse energy will bring to my home.

So my trip to Llandrindod turned into a rather magical outing. The agent of the magic was, in both cases, wood. The raw, rooted and solid energy of the oak and the small, delicate horse - wood transformed by human artistry. I have a strong affiliation with wood, and appropriately - it is also my name. 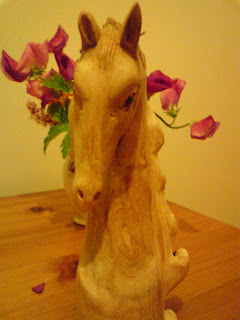