May and Canu Haf/Summer Carols 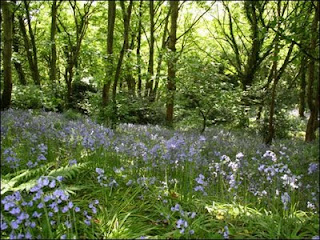 Verses of the Months
The month of May, the ploughman is extravagant;
every dyke is shelter to the destitute;
joyful is the lightly clad old man;
the wood is leafy, the wanton is glad;
reconciliation is easy where there is love;
tuneful are the cuckoo and the hound;
Mis Mai, difrodus geilwad,

﻿Canu Haf/Summer Carols
The Middle English word 'carol ' comes from Old French 'carole', meaning 'a dance in a ring' or a 'joyous song' and it wasn't until 1502 that it was first noted to mean a Christmas hymn. Summer carols seem to have been more popular in Wales than in England and were sung in houses as well as churches and chapels; some of the old carols call on friends and neighbours to sing together a song of thanksgiving for summer days.

Here's a summer carol called Mwynder Mai/the Sweetness of May. The tune was first published in The Welsh Harper in1848.  T. Gwynn Jones wrote a song to go with it: 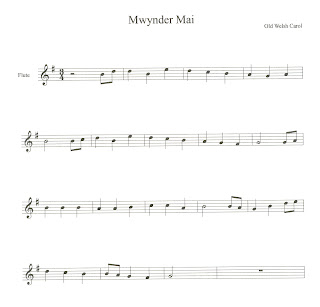 (I've just realised that the second note should be a C and not a D!  Unfortunately I don't have the software to change it any more. Click to enlarge.)
The Sweetness of May

The wizard of May is out riding unseen,
He captures the land with a network of green;
Soft waves of bright sunlight sweep over the leas,
And summer-time songbirds make merry the trees.

Though summer must languish and winter be long,
Though brief be the season of sunshine and song,
Though sorrow still tarries when happiness dies,
Sweet May is the promise of God's Paradise.

Labels: canu haf, May, summer carols, Verses of the Months