Urthona: the arts and the sacred 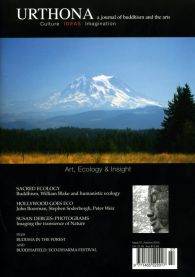 I came across Urthona [if you get diverted repeatedly, as I did, to a Dharma Link website, scroll down to the Urthona link] when the editors were doing an issue on Celtic Connections and asked if they could use an article of mine on Brigit. Urthona describes itself as a journal of Buddhism and the arts but has much to offer those who aren't Buddhist but are interested in the arts and the sacred; I think it deserves to be better known than it is.﻿
The name is taken from Blakes's spirit of the Imagination, Urthona, one of the four Zoas. Information in the front of the journal tells us that "In his temporal form Los, Urthona is the archetypal blacksmith who labours in his forge to beat out forms which will awaken mankind from spiritual slumber and remind us that this world is 'all one continued vision of Fancy or Imagination'.
"The journal seeks to present the work of artists and thinkers who:
Express the sacred dimension of the arts in ways which are relevant now.
Embody in their work the unlimited possibilities of human consciousness; its potential for insightful, sympathetic appreciation of nature, humanity and all forms of life.
Illuminate or embody the Buddhist notion of cultural disciplines as a Way, a means towards finding our true nature, that which is boundless and unconditioned.
Critical of the pervasive nihilism of our age, but aware equally of the dangers of falling into fixed systems of metaphysical views, the writers here explore (in the words of poet Peter Abbs) the 'suspended, open, precarious nature of spirituality'."
The current issue on Art, Ecology and Insight I found particularly uplifting and thought-provoking - it filled the day it arrived with beauty and inspiration. I especially enjoyed articles by:
Ratnagarbha on Buddhism, Blake and Deep Ecology
"The ancient view that the entire universe is alive, and that the worlds of mind and matter are not ultimately separate, is at the heart of the new discipline of Deep Ecology. Ratnagarbha discovers that both the cosmology of the Romantic poet William Blake and the world view of Buddhism have much to offer the ecology movement."
Vishvapani on Buddha in the Forest
"Vishvapani, author of a new book on the life of the Buddha, explores the neglected topic of the Buddha's relationship with nature" concluding that "The monks of the Theragatha... express a deep intimacy with the natural world that is born of long years spent outdoors, living beneath the stars and amid the animals and spirits. They don't sentimentalise nature and are all too aware of its perils, discomforts and snares, but neither do they reject it.
This intimacy is also the key to Gautama's changing relationship with the non-human world. he saw through his culture's terror of the wilderness by becoming intimate with his mind and finding within it the roots of terror. Then he was able to become intimate with nature itself.
His lesson to us is this: to heal our relationship with the natural world, we must heal ourselves."
Dhivan on Conscious Surrender to the Beautiful, an introduction to Sangharakshita's The Religion of Art
"In The Religion of Art, Sangharakshita explores the possibility of a unifying vision that embraces both passions [those of the Arts and of  Buddhism with its teaching of a path to liberation and truth] to find the truth in beauty and the beauty in truth." The article quotes Lama Govinda who wrote: Therefore wherever religion is a living force there it finds its natural expression in art, in fact, it becomes art itself - just as art in its highest attainments becomes religon. Art is the measure of the living quality of a religion." [my italics]
Vajradarshini on Ordinary Beauty which explores the Japanese idea of Wabi Sabi
"... this isn't a beauty which lifts us above our everyday experience but the beauty which is within our experience. This is the beauty showing us reality, showing us impermanence, imperfection and insubstantiality."
Eco-artist Ratnadevi on Living on the Edge of Uncertainty
"The explicit intention of many eco-artists is to elicit in the viewer an affinity with nature. It can be argued that this reason for art-making is as old as civilisation itself, with depiction of nature taking the place of the lost immersion in it. Contemporary eco-artists not only want to restore this sense of participation in the natural world, but also attempt to mobilise the desire to preserve and protect it, engendering the spirit of deep ecology. In that they are the brothers and sisters of many indigenous art-makers and ritualists through the ages. Deep ecology seeks a radical change of perception that views nature not from a separate standpoint, but from an embeddedness within it."
Beautifully produced, there are, as always, poems, photos, artwork and reviews as well as articles A feast for the intellect, the senses and the spirit. Well worth a look!
Posted by Hilaire at 14:30