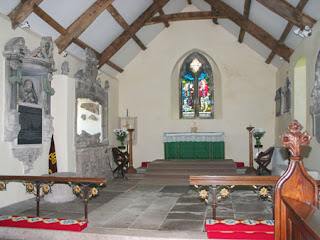 Interior of church, St Bride's Major
photo: Paul Williment﻿
I’ve finally finished writing about Brigit in Wales, St Ffraid, and uploaded it to my website. It’s several weeks after I’d planned to have finished it but various things have intervened to delay me and I also realised that I’d lost the insight I gained after being ill in the New Year: that by moving forward a small footstep each day –“ the footstep of a cock on a gentle evening when his crop is full” – things get done in an almost miraculous way. I’d become too caught up in wanting to have done something instead of enjoying the doing. So I relaxed about it and thought ‘It’ll be finished when it’s finished’!
I’d been meaning to write something about St Ffraid because there isn’t much about her on the web – as often happens, Wales is rather neglected. So it was a work of service to Brigit and to Wales – that sounds rather pompous – what I mean is that it felt like something I ought to do rather than something I was desirous of doing. But, as with all work of willing service, I have been enriched by it. I have felt much more connected to the story of Brigit in Wales: to the custom of St Brigit’s Ale which I plan to revive in some small way; to the places and rivers associated with her – especially the church at Llanon which I am inspired and uplifted by and the Braint on Anglesey which is another area I’d love to visit one day; I was pleased to find the Welsh form ‘Gwas Sant Ffraid’ in the tradition, meaning ‘servant, follower or devotee of St Ffraid', since, finding it more and more difficult to assign a label to my spiritual path (more of than another time) the one firm designation I give myself is ‘devotee or follower of Brigit’.
I was also conscious while I was researching and writing, of how slender a thread the Welsh story of Brigit is and how grateful I am to the tradition bearers who have contributed to spinning this yarn so that we can learn something about it today. In particular, of course, we are lucky that Iorwerth Fynglwyd’s cywydd has survived. He was one of the Beirdd yr Uchelwyr or Poets of the Nobility who were composing after the fall of the last prince Llywelyn in 1282. More specifically, he was one of the Cywyddwyr (c. 1350-1650) - the poets who developed a new form of poetry, the cywydd, which, although still linked to the tradition, was often more personal and emotional. Instead of a formulaic approach to mention of the saints, the Cywyddwyr displayed what seems to have been a genuine devotion to them. Iorwerth Fynglwyd was known particularly for poems which encapsulated some truth or proverbial wisdom and some of his cywyddau were the most popular in 16th century Wales. He lived at St Bride’s Major, Glamorgan, and therefore would have been especially familiar with the story of St Brigit.
In the late 19th and early 20th centuries, Sabine Baring-Gould and John Fisher carried out amazingly extensive research into the British saints – there would have been much less for me to say if they hadn’t written about Brigit – and in our own time Elissa Henken, professor of Folklore and Celtic studies, has written two interesting books about the Welsh saints, including material about Sant Ffraid and female saints in general.
And there are many more poets and scholars besides, providing links with the tradition so that we able to discover and be inspired by it. 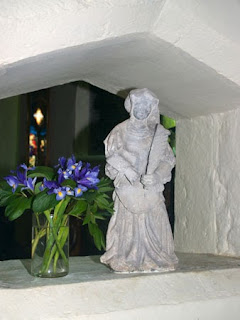 Statue of Brigit, St Bride's Major,
with pen in her left hand and book under her right arm
photo: Paul Williment﻿
Posted by Hilaire at 18:57