Kings, Druids and Trees: the Virtue of Steadfastness in Audacht Morainn 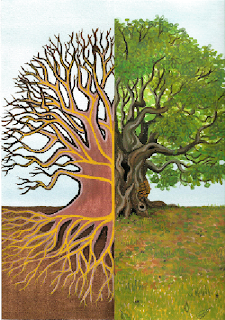 Audacht Morainn (Testament of Morann) is a 7th century Old Irish text which belongs to the medieval genre of Speculum Principis or Mirror for Princes. These texts were instructions to kings or princes on aspects of rule and behaviour.

I find it interesting that three out of the fifteen which Alexei identifies relate to the quality of steadfastness:

To those who are more used to the four Cardinal Virtues of Aristotle and Plato: Temperance, Wisdom, Justice and Courage, and the three Theological Virtues of Faith, Hope and Charity, this emphasis on the value of steadfastness is unusual and thought-provoking. It has been rather overlooked or minimised in more recent times.

Let's look first at the differences between the three.

Fossad, according to Alexei, means literally 'having a seat under oneself', and denotes "consistency and firmness in one's position, not easily swayed by outside opinions." The online Dictionary of the Irish Language (eDIL) gives 'stationary, fixed'.

Sessach, as we have seen, means 'sturdy, strong, steadfast' and the idea, according to Alexei, is someone who stands his ground and is not easily intimidated. There seems little difference between this and fossach, 'firmness in one's position' but I think the principle meanings of sessach, 'sturdy' and 'strong' are the key, emphasising the importance of strength -- here strength of mind which enables one to stick to one's position.

Forusta meaning 'well-grounded' and coming from the idea of 'having an established base' was, according to eDIL, generally used of 'persons experienced, sedate and of settled character'. So the ability to be well-grounded, to have a firm foundation, arises here perhaps from having learnt from experience and become settled and composed, at peace with oneself, sure of oneself.

So consistency and firmness in one’s position, strength of mind, and the ability to learn from experience, giving a firm foundation and enabling one to be settled and composed, are seen as desirable qualities in an Irish ruler and by extension in the ordinary citizen.

Are these qualities which were desirable or necessary to a druid? Our word 'druid' comes in a roundabout way (via Latin and Gaulish) from the hypothetical Common Celtic word *dru-wid-. "Dru-" can be traced back to the Indo-European root *deru- which means "to be firm, steadfast".
"Wid-" goes back to *woid-e (he knows), from the root *weid- (to see). English cognates of *deru- are "true" and "tree", and of *weid- are "wit" and "wise".

One linguist therefore interprets "druid" as meaning "he who has firm or steadfast knowledge". Another interpretation "knower of trees" has less credibility now, I believe. However, in a way they both carry a similar meaning since trees are rooted and therefore firm and steadfast -- hence our words "tree" and "true" from *deru-.

As you can see from the picture of the oak at the top, a tree needs to have roots which penetrate almost as deeply into the earth as its branches reach into the sky. It is this rootedness which enables the tree to grow, to flourish and therefore to offer benefits to the environment around it -- from providing food for animals and insects to offering shade and processing oxygen and carbon-dioxide.

Alden Watson, in his article The King, The Poet And The Sacred Tree, asserts: “That the sacred tree [bile] was intimately connected with the concept of kingship is shown by its presence at the king’s inauguration site.” The tree was seen as being able to shelter the tribe and one, Eó Mugna, was so large it covered not only the whole tribe but also the tribal territory.

The poets, the fili, were the survivors of the druid class in Ireland. Of five sacred trees mentioned in ancient Irish texts -- Eó Rossa, Eó Mugna, Bile Tortan, Bile Dathi and Craeb Uisnig -- four are associated with poets or their successors, the saints. The poet Bimudine lived by Bile Tortan; Eó Mugna is felled by Ninine or in another account, by a group of poets; Eó Rossa was felled not by a poet but by a saint (the poets’ powers were transferred to the saints in the stories and legends) and Bile Dathi fell on the poet Dathan, killing him.

The right of kingship may have been bound up with the poet and the tree: Ninine felled Eó Mugna because the king had refused something Ninine had asked of him. Generosity was one of the requirements of kingship and poets expected to be well-paid for their services. By felling the tree Ninine was severing Domnall’s right to kingship, showing that the poet was both king-maker and destroyer. That the poet Dathan was killed by Bile Dathi suggests that the sacred tree itself could take away the role of chief poet to one who was found to be unfit.

According to one inaugural ode, it is the poet who hands the rod of kingship to the king at the inauguration site and although the bishop and nobles are present, only poet, king and gate-keeper are granted access to the site. The rod was sometimes described as a hazel wand and the hazel appears elsewhere as the tree of wisdom. Watson attributes wisdom as the quality which is mediated from the tree through the poet to the king but as the sacred tribal trees are not hazels but large trees, ash, oak and yew, I wonder if it is the virtue of steadfastness, with all the nuances we have seen, that are bound up in this sacred three-way relationship. Perhaps the transfer of the hazel wand to the king as a symbol of wisdom is separate from the idea of the bile.

At any rate, as the article concludes, “The sacred tree stood at the center of the religious and symbolic life of the tribe, drawing it together through the relationship of king and poet, from whose association stemmed the order and coherence essential to the very existence of society.”1

As the Buddhist Jack Kornfield states: “The laws that govern wise relationships in politics, marriage, or business are the same as in inner life. Each of these areas requires a capacity for commitment and constancy, for taking the one seat.”

While working with the Order of Bards, Ovates and Druids course material on the element Earth at the beginning of the 1990s, I had a vision in my mind’s eye of another benefit of the quality of steadfastness.

I saw an image, as bizarre and instructive as a dream image, of a stone circle. The stones were all upright and connected by an elastic band which held them in tension and harmony. Then as I looked, one of the stones became unstable and began to lean forward. At a certain point this had an effect on the other stones which began to twist this way and that as the harmonious tension between them was lost. At the same time I had the realisation that by keeping grounded and steadfast, in some indefinable way I enabled others to keep or find their stability. If I became unstable, uncertain by leaning or being swayed by others, some essential harmony and uprightness was lost.

In my case, it had a lot to do with boundaries: by sticking to my boundaries and remaining steadfast others would also find their boundaries and be encouraged to live with integrity. If I swayed too much away from my own values and my own good, giving away my power to others, it was possible to actually have a corrupting influence on them.

As always there are fine lines to be drawn between refusing to yield what is good for oneself and being selfish. And more generally between firmness and a rigidity which refuses to listen to others. The key is that the virtues should be taken as a harmonious whole, rather like the stone circle. They then temper each other so that, for instance, steadfastness does not deteriorate into rigidity or hardheartedness because is it tempered by Trócar, Mercy, the word also carrying the meaning of the ability and willingness to empathise with others, and by Gart, Generosity, as well as by Fírbrethach ,which, as Alexei says, means giving the correct judgement, not allowing one’s personal bias to interfere with the determination of what is right and wrong.