Vasant Panchami and the Feast Day of Brigit 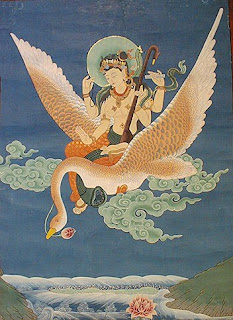 ﻿
Today, January 27th, here in Wales, is the day of the puja (worship or reverence) of Sarasvati, a sister goddess to Brigit. (You can find out which day it is in your part of the world on this website.) Vasant Panchami is celebrated on the fifth day of the waxing moon period of Magh (the month of January-February) in the traditional Indian calendar. In 2017, the date will be February 1st which is also the feast day of Brigit.
Sarasvati is the goddess of thought, memory and creative intelligence. These give rise to culture and so, not surprisingly, Sarasvati has become the goddess of culture. She is the inspiration behind the arts, often invoked by poets, but also associated with music, dancing and science. She is usually depicted with a vina or lute, and a sacred book. Books, pens, musical instruments and gurus are worshipped on this day and pictures and statues of her are put up in educational establishments.  Tradtionally children were taught to write their first words at Vasant Panchami and she is venerated in schools. The following song is sung to her:
O Divine Virtuous Goddess Sarasvati. We bow to your feet. O Goddess of Speech, the all-pervading with cosmic vibrations, we surrender at your Divine feet.
O Goddess, shelter to the seeker, blessed of the Three Worlds, worshipped by divine seers. Your melody is with the nine aesthetic senses and divine poetry, adorned by the varied tastes of learning.
O the one seated on the throne of swan, O the one endowed by white complexion pure as snow and moon, the one seated on the white lotus, remove from us lethargy and expand our horizon of vision.
O Goddess, you are the embodiment of artistic skills and string of knowledge. O the one holding the divine book of learning and the vina, we submit ourselves in entirety at your lotus feet. O Goddess, remove from our minds the poison of hatred.
Vasant Panchami, like the feast day of St Brigit, marks the end of winter and the beginning of spring. The colour yellow is symbolic of the festival, expressing the brightness and vibrancy of life and nature. People wear yellow clothes and give yellow flowers as offerings and gifts. A special delicacy is made which is coloured yellow by saffron and also contains nuts, cardamum, sugar and flour.
The puja tray is an important part of everyday devotions to the deities. Here is an excerpt from the website http://atschool.eduweb.co.uk/carolrb/hinduism/puja.html explaining which objects are placed on the tray and what they symbolise as well as what devotions at the evening session consist of:

The evening session will be a much longer session and will include reading of holy books, discussions, teaching, meditation and prayer. Hindu parents spend a lot of time teaching their children about their religion.
Many Hindus meet for festivals at temples or mandirs, but most prayer is within the family at the family shrine. There is no need for regular church meetings for the congregation.
In the puja Hindus use their senses to make them feel close to God. They use music and chant the aum to make their ears aware of God. They use beautiful images to make their eyes aware of God. They burn ghee butter and incense to make the air smell sweet so that people focus on God. Specially prepared sweets and foods are part of ceremonies so that helps Hindus think about God. Finally the arti ceremony is where the sense of touch is stimulated to make people think of God.
Sarasvati has four arms, symbolising ego, intellect, alertness and mind. She is often shown as above, sitting on a white swan, a symbol of purity, or a lotus, symbol of transcendence. When her vehicle is a peacock it is said by some to mean that a strong ego can be reigned in by wisdom.
Those of you who are familiar with Brigit as goddess and saint will see that there are many similarities between these goddesses. I have explored them more fully in the article Brigit, Sarasvati and the Sacred Word, on my website, Brigit's Forge.
Today happens to be the start of my shift as a flame-keeper and well-tender for the group Nigheanan Brighde so I decided that after I'd lit the flame and recited the group prayer I'd also honour Sarasvati tonight. I put a statue of her on my shrine, and rang a bell I keep in the small cupboard that my limestone carving of Brigit rests upon. I offered rosemary and parsley as flowers, along with oats instead of rice, and rice-cakes with strawberry jam instead of the usual delicacy, lit some Indian cone incense and put water in Brigit's swan vase for ritual cleansing. Finally I used some red paint from my paintbox to dab on my forehead and recited the prayer as above. It was a beautiful small ceremony and ringing the bell and placing the red spot on my forehead felt especially potent. I hope Brigit approves and enjoys the company of her sister deity this night. 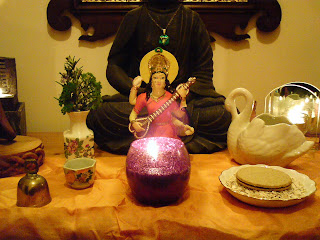