About The Gardener and The Goddess 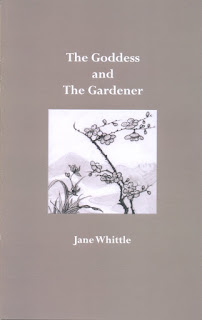 Poet and writer, Jane Whittle, explored Britain alone on foot for many years before settling on the coast of West Wales, where she began to make a garden from a patch of un-tamed mountainside 'in a place where rainbows land'. The poems in this book arose from that mysterious space between dream and reality experienced in the landscape, first by solitary long distance walking and then by sinking a root in one unspoiled place. They are accompanied by the author's own illustrations.

The poems are divided into two halves. The first half are in the voice of The Gardener, the woman who has stopped her physical journeying and has settled, finding 'new strength/to stay at home'. We are taken on the Gardener's inner journey through the seasons, from spring when 'New arrivals/crowd their neighbours/budding intermezzos drown in brazen greens' to winter, when 'The earth is hard on new flowers/broken by gales and frost'. Through her we meet the Goddess in different guises as she allows the Gardener to see the magic of the garden emerge and to experience her at the source of much that is around us - in a faltering stream, in the colours of the rainbow, in a leaf uncurling, in the cycle of elderberries from flower to wine.

In the second half we are privileged to hear the voice of the Goddess herself, first as Eurynome from early Greek myth who created the earth with the help of the serpent Ophion but banished him when he tried to take all the credit, then as she reveals herself in water, in wind, in a poem but above all in the earth. 'Lay yourself down/ and become land' she says, 'Listen - you will hear me'. 'As I turn and re-turn/, I return you to life.../  Remember my story.'

Jane Whittle's language throughout is skillful, simple with the simplicity of archetype, conveying in a few well-chosen words a depth of meaning that offers us new insights and delights.


Copies of The Gardener and The Goddess published by Brigit's Forge ( ISBN 978-0-9574106-1-9) are available to buy from this website (see sidebar) whether or not you have a PayPal account.