I Thought The Tree Was Rather Ordinary Until Yesterday.. 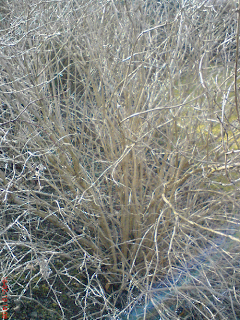 Yesterday I went for a quick excursion up to the top of the garden in my lunch break to breathe in the fresh February air and look out over the hills. On my way back I was suddenly arrested by this bush, shining out from amongst the dark soil and general dullness of the afternoon. There was no frost or snow to make it gleam so and I stared at in wonder for some time, uplifted by it. When I moved closer I saw that there were tiny, almost invisible buds of the same colour shooting from the ends of the branches. It seemed to me then it was glowing with the creative energy of spring.

The line of a poem by Brian Patten sprang into my mind and coming back to the house I looked it up. It wasn't at all like my rather ethereal vision but a more embodied experience of the coming of spring, written by the poet as a young man. Here are the first two stanzas:

I thought the tree was rather ordinary until yesterday
when seven girls in orange swim-wear climbed into its branches.
Laughing and giggling they unstrapped each other,
letting their breasts fall out,
running fourteen nipples along the branches.
I sat at my window watching.
'Hey', I said, 'what are yous doing up there?'
'We are coaxing out the small buds earlier than usual',
said the first.
Then the second slid down the tree - amazing how brown the body was -
and naked she lay on the dead clumpy soil for an hour or more.
On rising there was a brilliant green shape of grass
and the beginning of daisies.

'Are you Spring?' I asked.
'Yes', she replied. 'And the others also, they are Spring.'
I should have guessed.
What other season permits such nakedness?

from The Irrelevant Song by Brian Patten

The rest of the poem goes on to describe the nymphs of spring coming into the house and the poet's world bringing renewal and joy: "they'll take our hearts to the laundry/and there'll be but joy in whatever rooms we wake". Yea to that!
The mind, it seems, is associative; it seeks to re-mind and re-member. I wasn't consciously thinking that the bush had looked ordinary before and certainly not in words; I was simply struck by its beauty. But my subconscious mind looked for some previous experience to equate with this one and, searching the archive of the brain, came up with this: someone else's description of an extraordinary tree I had read and liked decades ago.

I wonder what it was filed under?
Posted by Hilaire at 00:11 No comments:

Rilke's Letters To A Young Poet 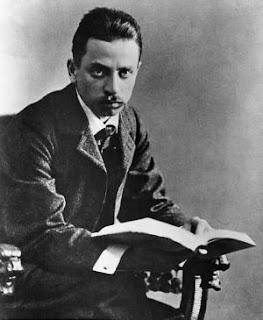 There is not as much as I should have liked about the art of writing poetry in this book but what there is well worth reading. I found it refreshing to hear Rainer Maria Rilke telling the young poet Mr Kappus:

"You ask whether your verses are good. You ask me. You have asked others before. You send them to magazines. You compare them with other poems, and you are disturbed when certain editors reject your efforts. Now... I beg you to give up all that. You are looking outward and that above all you should not do now. Nobody can counsel and help you, nobody. There is only one single way. Go into yourself."

Rilke goes on to counsel against writing love-poems and those forms which are too common as being the most difficult "for it takes a great, fully matured power to give something of your own where good and even excellent traditions come to mind in quantity."

Rather the young poet should use the themes that come out of his everyday life and describe them, using "the things in your environment, the images from your dreams, and the objects of your memory. If your daily life seems poor, do not blame it; blame yourself, tell yourself that you are not poet enough to call forth its riches; for to the creator there is no poverty and no poor indifferent place... And if out of this turning inward, out of this absorption verses come, then it will not occur to you to ask anyone whether they are good verses. Nor will you try to interest magazines in your poems: for you will see in them your fond natural possession, a fragment and a voice of your life. A work of art is good if it has sprung from necessity. In this nature of its origin lies the judgment of it: there is no other."

The Welsh poet, Vernon Watkins, would have agreed with the need to look inward rather than to the outer world:

"In every genuine artist the first care is to use his gift in such a way as to satisfy his imaginative need. If the whole world applauds a work, and it does not meet this need, the work, from the point of view of the artist, is a failure."1 Yeats too thought that poems which were the best of their kind were written by "every writer of the imagination who is true to himself". 2

This turning in on oneself is vital, especially but not solely when starting to write, because one of the most important ingredients of a good poem is its ability to show a unique vision of the world, or of an object or a situation. Sylvia Plath talked of a poem being like a snow-globe turned upside down so that the world no longer looks the same; Emily Dickinson advised seeing things 'slant', in other words from a different angle.

The other requirements for a good poem, attention to rhythm and form (even free verse needs rhythm and a coherent shape) and a skilful use of words, may be studied to improve upon any natural ability. But a unique vision depends upon the poet's perception, and imagination is needed to make sense of perceptions: it is the faculty through which we build up a picture of the world. When you are reading such a poem things no longer look the same because you are looking through someone else's eyes.
~~~~~~~~~~~~~~

Many of the other letters in the book address the problems of being ‘a sensitive observer in a harsh world’ - a common predicament for a poet. Although Rilke offers wise and comforting words, his own life was far from untroubled, even as he was writing them. He recognises this and tells his young correspondent so, in the most elegant and poignant way:

"Do not believe that he who seeks to comfort you lives untroubled among the simple and quiet words that sometimes do you good. His life has much difficulty and sadness... Were it otherwise he would never have been able to find those words."
His translator, M. D. Herter Norton, comments: "Though Rilke expresses himself with a wisdom and a kindness that seem to reflect the calm of self-possession, his spirit may have been speaking out of its own need rather than from the security of ends achieved, so that his words indeed reflect desire rather than fulfillment."

Richard Bach said something similar, less elegantly but more succinctly: "We teach best what we most need to learn." Duly noted.

1 quoted by Richard Ramsbotham in the introduction to New Selected Poems
2 quoted by M. C. Flannery in Yeats and Magic
Posted by Hilaire at 18:05 1 comment:

Another Skin Bites The Dust 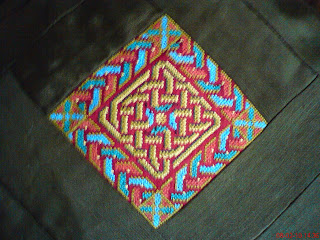 It was my 60th birthday last week. My friend Kate embroidered a cushion cover for me, inspired by a poem I wrote some time after my parents died. It's about shedding a skin, about transformations and how we often move through them in a slow way, even if it is a sudden event that catapults us into them. After my parents died it felt as if my brain was being reprogrammed to take in new information I hadn't encountered before: the vacuum death creates, the absence of people who had been always there. It took time.
This birthday watershed is different; obviously I knew it was coming. I think I have been moving slowly into it for a few years and have now arrived at a gateway I am prepared to step through cleanly. It feels like an exciting time. This stage of my life is less mapped out than those that went before: the insistent rhythms of school, university, job and childcare are absent. There are many experiences to be gathered in, a second flowering feels possible..
Reading through my snake poem again it seems in tune with my New Year perception of gradual but persistent change:
If I Were A Snake

If I were a snake I could shed my skin easily,
No, not easily perhaps, but quickly,
It would be like taking off a tight coat
In a small space
And being revealed in my smartest clothes,
Freshly-purchased, cool and colourful,
Ready to introduce myself again,
A re-invention.

If I were a snake, I’d think little of it,
I’d have been born with an instinct for change,
A talent for it, I’d have moved swiftly
Through all manner of deaths and entrances,

But being human my skin sheds differently;
It scales, exfoliates, delicately
In its own time, as soft and silent in its falling
As flakes of snow.
Long before death, parts of my body
Have become dust, hovering and settling around me,
Particles of the past.

Being human, shedding my whole skin
Would be violent - unviable. Imagine
Uncovering the dark and secret throbbing of the heart,
The lungs’ bloody, tidal rhythm,
The fat and frantic traffic of the gut.
How could I survive without a barrier of skin,
Of soft and subtle hide?

I choose then the human way,
To move towards this new beginning,
With gossamer steps, an unfurling so gradual
That time itself seems frozen.
As gently and silently as drifting snow,
I move out of my old skin, discard the past,
Let it hover, then disperse,
Lightly dusting the future.
© 2004
Posted by Hilaire at 14:55 3 comments:

Weapons are instruments of bad omen,
not instruments of the noble.
He uses them only when he cannot help it.
Quietness and peace are his highest values.
He gains victory but he does not rejoice in it.
Whosoever would rejoice in it
would, in fact, rejoice in the murder of men.
Whosoever would rejoice in the murder of men
cannot achieve his goal in the world.
In fortunate circumstances one considers the left the place of honour.
In unfortunate circumstances one considers the right the place of honour.
The vice-commander stands to the left,
the supreme commander to the right.
This means: he takes his place
according to rules for memorial services.
Killing men in great numbers
one must bewail with tears of compassion.
Whosoever has been victorious in battle
shall linger as if attending a memorial service.

Extract from the Richard Wilhelm edition of the Tao Te Ching, Arkana Books, 1985
Posted by Hilaire at 16:52 No comments: